This blog has been found to be very sluggish, at several times over the last four days or so. My apologies if you’ve also encountered the slowdown. It’s not the site itself that’s slow, but rather the WordPress install, which is patched to the latest version. As such I assume that some other site, hosted on the same server at my ISP, has been periodically hogging back-end database access. The blog’s speed seems to be fine now, but this problem may return. There’s nothing I can do about it, and it’s up to the ISP’s techies to spot the excessive traffic/database-use and fix it.

Artists beware. At least one person on DeviantArt is putting pictures under Creative Commons, then when you take them up on the permission… they remove the licence from the page and falsely claim you ‘pirated their work’ and that they want $600 cash.

Those using ‘stock’ and CC pictures should always, as I do, keep ‘a PDF save’ of the page showing the licence or permission. Then you can prove that such a person is lying, if they make such a claim.

I’ve been blogging quite a bit recently on automation in graphics software, and have gone back over the posts and tagged them with a new tag: “Automation”.

I’ve updated things on a couple of earlier posts.

1) I’d forgotten that Queue Manager rendering had been enabled for Superfly in Poser 11, back in patch SR3. I’ve updated the post I made here about eight hours ago, which said it a Firefly-only feature. (That’s what comes of reading the manual, rather than my own blog! That’s also what comes of doing too many Preview renders in Comic Book Preview mode… you forget about the advanced rendering types like Superfly!)

2) There’s a patch for the newly free Grobot, Grobot For Poser 11, apparently making her work better in Poser 11. Though you’ll want to read the readme.txt first. I did and I decided I’d stick with the original and my workarounds for now.

I first had my Kindle Fire HD tablet at Christmas 2017, at a bargain price, and it’s done great service. I wrote a short but detailed guide for new users at that time, which appeared on this blog. That post encapsulated what I’d learned on how to set up the Fire and the best apps. I’ve now updated that post…

* AIMP is now my preferred audio player on both Desktop and Kindle. AIMP has a fine free Android app that can be ‘sideloaded’. It does easy bookmarking of audio files.

* The NX Player app is also free, and was the only genuine freeware I could find that is able to play the audio streaming from your PC over wi-fi, when using the open-source desktop freeware “Stream What You Hear” on your PC.

* OneCast is definitely the best free podcatcher for podcasts. Excellent coverage and all nine of my regular podcasts could be found in its lists. Superb interface, no ads or nags.

* Screen On is the best genuinely free app to keep your Kindle from dimming or rebooting while you listen to music on wireless bluetooth headphones. The 2017 Kindle Fire’s bluetooth coverage and power/range is excellent compared to a £10 USB stick transmitter. With the aid of Screen On, the Kindle can be used as a base-station for bluetooth headphones.

* To send Web links to things like YouTube videos, without some Cloud sharing service or QR codes or similar, just set up a Trello board for your links and drag/drop the link onto a card there. They then show up in your Kindle browser, which is also pointed at the Trello board. When you drag and drop onto a Trello card, it embeds a live clickable link to the Web URL. Thus there’s no tedious copy-paste involved anywhere in the process. I looked long and hard for a simple way to pass live clickable Web links between a PC and a tablet, and this was the best.

My Python scripts for Poser 11 page has updated today, with a full check and repair of the Web links.

All of the sidebar Web links on this Poser/DAZ blog have been checked by hand, and cleaned and/or updated if needed. New Web links will be added to the Directory over the coming weeks and months. 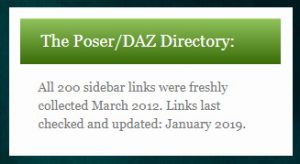 I’ve fixed the broken download links on this blog’s Stuff for free page. The download links there are on SendSpace, and these links only lasts for 30 days — unless someone resets the link back to 30 days by downloading the file. There may thus be times in the future when the downloads become unavailable again.

Hi again! After nine months of hiatus, I’m pleased to say that I’ve regained the jurn.org domain, and with it this blog. Almost everything on the blog still seems to be working as usual, even the Pinterest sidebar gallery. The “Stuff for free” links will be fixed soon. The WordPress blogging software install has been updated to the latest secure version, the Classic Editor plugin installed to rescue the posting UI from ‘makeover mania’, and the blog seems ready to roll again.

I think I’ll do a series of three seasonal “best of new Poser/DAZ content” surveys as a catch-up, rather than trying to monthly ones: summer 2018; Autumn/Fall 2018 and Winter 2018/19. Watch for those here soon.

But first, a quick glance at what’s new or coming soon with tasty creative software since early summer 2018.

* the free open source painting software Krita 4.x has made several vital upgrades, and is now in 4.1.7 which came out just before Christmas. A very fine bit of software, and the laggy brush-engine of version 3 is now really fast and smooth. Lovely brush engine / library too, and brush stabilisation built in.

* SketchBook Pro went wholly free on Windows, though that caused its Android app version to become unavailable on the Kindle Fire tablet. In my opinion, Krita 4.x should now be your choice for desktop painting, before taking the painting to Photoshop for finishing.

* the full 1.0 version of the free open source vector / .SVG software Inkscape is due relatively soon and is currently available in alpha. Sadly there’s still no Illustrator .ai import support for older .ai files — it was such a huge mistake to remove that.

* the Photoshop behemoth continues to roll onwards, and just this week Adobe swallowed the Substance Designer / Substance Painter folks, and will subscription-only it in November. I hear that the very latest Photoshop version also has sufficiently good brush stabilisation to make the Lazy Nezumi Pro plugin defunct, although for inking line-art the latest Krita (free) is probably now the way to go.

* CrazyTalk Animator. Set to be re-named to the bland and un-findable ‘Cartoon Animator’, with the ‘coming soon’ version 4. Whatever the name, it’s still fine software for 2D animation and also for speeding up production of comic-strip / webcomics-style comics, with good balance of ease-of-use and power. Version 4 will bring ‘smart’ IK, motion re-targetting between characters, and more. Version 4 is due March/April 2019.

* Poser continues development and is now in 11.1.1.x and has a new official DevLog which lists changes and has news from the new development team. Access the patches and updated content for Poser from the latest version via the Download Manager.

* The new Lightwave, just revealed, promises seamless and automatic Unreal integration. Which suggests that there may be an easy path there from Poser scene > Lightwave > Unreal. Though there may not be a Lightwave 2019 upgrade to the Poser Pro plugin for Lightwave for a while.

* Cinema 4D had an major update, though nothing in it really grabbed me. The same was true for Keyshot.

* The real-time World Creator 2.0 is built on the Unity engine and I was lucky enough to get a review copy at RC14, and the eight-page review for that was published in Digital Art Live magazine #32 (Sept 2018). Difficult (but not impossible) to use without a really powerful graphics card, though.

* FlowScape is a fun simple real-time ‘natural landscape generator’, built on Unity. As with World Creator you’re probably going to need a whopping great graphics card to run it smoothly.

* Vue has gone ‘annual subscription’ and also changed the user interface. But I’ll be sticking with my Vue 2016 R4, which was the last before the UI changes and other problems started. I have no idea if the tight Poser integration has been retained in the new version, but I assume it has.

* MoI 4.0 (Moment of Inspiration) should be out soon. A nice fairly easy NURBS modeller that’s worth taking a look at.

It took me a while, but all the old runtimedna.com Web links on this blog have now been fixed. There were several hundred of them. About 70% of the old links have be re-routed to where the content is now located. About 20% of the linked content appears to have been withdrawn from sale, or had a short generic name that made it impossible to re-find. In that case I’ve deleted the link but kept the picture, adding an Update: line alongside. The remaining 10% of links were found to be on time-sensitive posts (store sales etc) and those posts have been deleted.

I’ve added a new category on this blog’s sidebar Directory, for render farms. I’d be interested in adding a link there for a sturdy/affordable online render farm for DAZ Studio + iRay users, if anyone can suggest one. 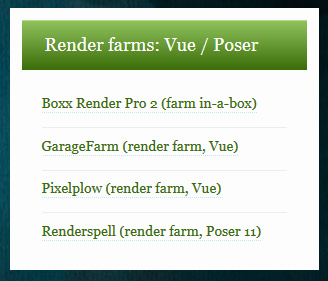 All of this blog’s 250 sidebar links have had their annual check, by hand and eye rather than an auto-bot. Problematic links have been repaired or deleted, as needed.

Readers of this blog may have noticed new posts flashing up on this blog, only to be seemingly removed some hours later. Their ‘removal’ is due to the ongoing problems with my website host’s database servers, problems which have been going on for about ten days now. The overall site and domain is stable, but the database server is not. This impacts on the WordPress blog, which requires a database to function. When the database server crashes and reverts to a stable backup of its contents, it has the effect of wiping my recent posts. Currently the blog is stable to 6th April. I have backups of all the contents and also the wiped blog posts, and will re-post those once the blog is stable again (i.e.: if this post remains live and doesn’t also vanish). Thanks for your patience, readers!

It’s been a little over a year since I checked all the ‘The Poser/DAZ Directory’ sidebar Web links on this blog. Last night I checked them all by hand, and have either updated or deleted the broken ones.