Spurred by a misleading magazine blurb, I’ve been trying to figure out Corel Painter 2017’s new supposed 3D paintover capability. I thought perhaps you could import .OBJs and paint on them. Nope, despite what the blurb says… 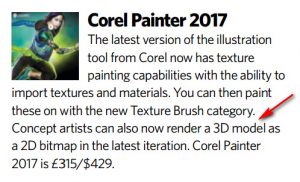 OK, so can you somehow import a 2D render of a 3D object, with the material-zones intact as masked layers and ‘paintable into’? Nope. Two of the reviews say “no”.

You actually just import a flat 2D outline-masked PNG render and… erm, paint on it. Yup. 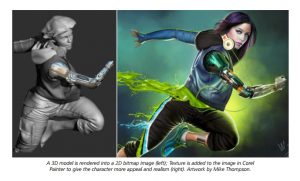 Not so impressive as it sounds then, and you can do much the same with Photoshop. Maybe I’m misunderstanding it, but… how is this even being touted as a new feature?

Poser 11 users have another of the scheduled upgrade patches waiting in their Smith Micro Download Manager. The SR5 patch (11.0.5) for Poser 11 is ready for download…

My selected highlights of this update are…

* Character creators will also enjoy many improvements and fixes. The .OBJ export is also improved.

* 3DS Max 2017 users have had support added to PoserFusion (Pro only), enabling you to send your scene to the latest version of Max for rendering.

If you’ve been away over the summer, and are only just settling back into university or work, don’t forget to catch up with the summer issues of the free Digital Art Live magazine. This free monthly magazine is Poser and DAZ -friendly and is devoted to science-fiction art and artists… 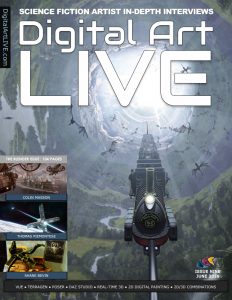 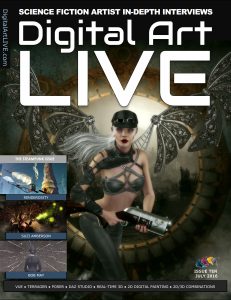 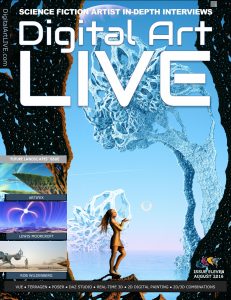 Next up is the September issue, set for release any day now. Contact Paul to be put on the mailing-list. September’s theme will be Second Skin: tattoos, future-skin and cyber-skin. 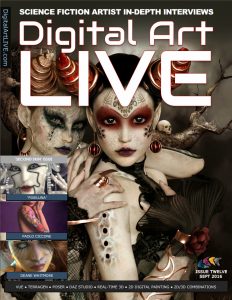 Ever wondered why Photoshop doesn’t have real-time line-smoothing for its brushes? It’s probably a market-driven thing, rather than about the technology. My guess is it’s something to do with not wanting to cross into Adobe Illustrator territory.

Anyway, there is a way to get excellent line-smoothing in Photoshop. You just install the Lazy Nezumi Pro plugin. The software’s landing page makes it look rather complicated, but that’s mostly just the settings options. It’s actually quite simple, and you’ll get good results with default presets. It’s very light on your PC system resources, too. It’s only for Windows.

Also works with Corel Painter, Sketchbook Pro, Manga Studio and others, though they all have line-smoothing in one form or another.

I felt like reading The Lord of the Rings again and so was very pleased to hear about Phil Dragash‘s recently completed project. He’s a Tolkien fan who has completed an excellent 48-hour unabridged reading and voicing of the complete text of The Lord of the Rings, and even the “Durin’s Folk” part of the Appendices. So listeners get the useful and beautiful ‘slow build-up’ chapters that are usually skipped in the rush-rush-rush to get out of the Shire, such as: the Crossing of the Shire; the Elven meeting; the Old Forest; the Barrow-downs; Bombadil and Goldberry. Nor is there any omission of Bill the Pony; Elrond’s Council speech; the Scouring of The Shire, etc etc. But it seems we don’t get most of the Appendices, such as “The Tale of Years” or “Of Hobbits”.

Phil has absorbed all the ‘pro guidance’ provided by the sound-design for the films and the excellent BBC adaptation, in terms of how to do the audio characterizations, sound effects and voice-work. On top of the result Phil has woven in Shore’s superb music for the film trilogy, to try to make an ‘ultimate’ The Lord of the Rings experience — all the ‘pro approaches’ to the work assimilated, plus the unabridged text of the book, plus the ultimate Cinemascope of Your Own Imagination.

Phil’s final-final version is “2013-2014 (192kbps)” for which he went back and touched up his early few hours of reading up to “A Shortcut to Mushrooms”, to get the characterizations more in line with what they became in the later readings. This version rocks in at around 4Gb in size. I’m told there’s also a much more highly compressed version knocking around, which somehow squeezes the same files into about 400Mb, and is probably a good option for playing from an older Kindle eReader or similar.

I’ve only heard the early parts so far but it’s obviously an amazing work and tribute to J.R.R. Tolkien. It should widen and deepen the fan-base, by bringing the more intelligent of the film’s fans into a reading of the full book in an accessible manner. Of course it’s an unofficial and non-commercial and free fan-project, but it is highly professional and very well-regarded by true fans. Phil is also an artist and he has made matte paintings to accompany the audio experience…

The official alternative is the excellent commercial unabridged reading by Rob Inglis. This is a straight reading, and includes the Appendices. The Appendices often drop some additional “what happened next” plot development snippets, taking the story beyond the end of the book. Inglis has also read The Hobbit in the same manner. His reading is very professional, but he’s too English. I keep catching all sorts of intonations in Inglis that, to a native English-speaker of long-standing, convey all sorts of unwanted and very subtle subtexts and social-class shadings. Dragash, being Croatian but an absolutely superb mimic, is much much better in that respect.

There are also several well-made BBC Audiobooks dramatized versions. These are abridged, I seem to remember, with no Bombadil or Barrow-downs, but they do have many of the songs put to to music and sung with the sort of rough zest with which most of them need to be sung (steer well clear of professional middle-class folk musicians in studios ‘doing Tolkien’ with twinkly harps, is my advice — they set my teeth on edge).

Lastly, beware of Amazon’s thoroughly confusing jumbling together of different The Lord of the Rings audio readings as if they were the same item. Judging by the reviews there some unsuspecting people have ordered a dire ‘American voices’ unabridged reading (NPR/The Mind’s Eye), hoping to get the BBC or Inglis audiobooks.

Update: I am finding the superb Dragash reading just very slightly sibilant, when using Windows Media Player and wide-response headphones (Phillips SHD9000/10, with 17-23,000Hz response. They’re now called the SHD9200/10 and boast 17-24,000Hz). I switched to the free open source Impulse Media Player, which has graphic equalizer controls. I felt that using the following slight tweak was good for increasing the in-a-cinema feeling of the reading, and taking the edge off the very slight sibilance… 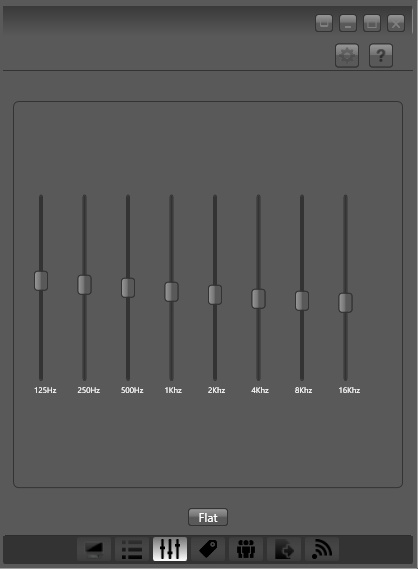 The above slightly boosts bass while reducing treble. You could also try a tiny pitch shift of -1 in Impulse Media Player, in combination with the above.