The free Krita 4.2 final has just been released for the desktop. It’s an important release, and of course is free as it’s the flagship digital painting software for ‘open source’ creativity, Krita 4.x rivals Autodesk’s Sketchbook Pro and has clearly outpaced a clutch of similar software.

4.2 Release Notes and New Features in Krita 4.2: Release Video (start at 0.52 seconds if you want to skip the intro).

– easier ‘move and transform’ of selections.
– rotate your canvas from the Overview mini-window.
– resize the Layer thumbnails.

– updates GMIC filters plugin to version 2.4.5.
– some new Blend modes such as Freeze, Glow, Heat and Reflect.
– and there’s a new Noise generator.

I’ve previously looked in depth here at the potential of its GMIC filters for doing interesting toon-ification things with Poser renders, and I like what I see.

Be warned that it’s not like Blender, in that you can’t have multiple versions of it on the same PC. It’ll remove your old version. But I found that my Brush preset tagging and custom UI remained as it had been in the old version.

It’s once again near the end of the month, and thus time for me to survey the new releases for DAZ Studio and Poser. Another bumper month of releases. Here’s what I noticed in among the May 2019 releases.

A free Klingon Head Morph for La Femme, the new flagship Poser figure. Star Trek, so for fan-art only, obviously.

A futuristic candygirl, Emiko for La Femme, for Poser 11. I’m not keen on the jelly-hair, but it could be replaced. Shows how flexible the new La Femme can be, in terms of getting away from the default ‘Princess Di’ look.

Planet Irida, an unusual ice-planet and flora, for DAZ Studio.

Need some fierce pets for your ATLAS warriors? How about Cassius HD, a new monster dog for Daz Dog 8.

A new fan-art freebie Deepcore – Abyss Rig v2.0 is the deep-sea exploration rig from the pretty-good James Cameron movie The Abyss. Obviously not for commercial use.

A free spaceship bedroom/corridor which is mildly unusual in terms of taking into account the need for low-gravity weightlessness rungs. I like details like that, which make me think, “yes, that’s what they’d have…”.

A slicker and more far-future SF Corridor for DAZ Studio, with viewing windows.

War Manta for DAZ Studio. And an Area 52-like Hidden Zone to serve as a base for your mantas. Looks to be expandable with the larger Mesa Desert 360-environment.

SC20 Gym, a modern gym interior that could probably fairly easily be adapted to be an underground hangar for the above War Mantas.

Chronos for Genesis 8 Male. At first I thought meh!, but actually it has a nice retro late-1950s Jack Kirby monster-comic vibe to it.

When the tentacles attack, your characters might need to dive into the Post-apocalyptic Survival Bunker!

You’ve surely got airships in your runtime. But what about the control decks? The new Steampunk Airship Cabin and control deck. This may also interest Vue users, as an export.

Your airship is probably headed to the new Epic Environments – Floating Sky Island. Again, this may also interest Vue users, exported as an .OBJ file.

New female outfits that would match the airship are dForce Minimalist Chic and dForce Redgrave Outfit and the free Classical Retro Dress for G8F (commercial use for renders).

The airship crew might be in the dForce Anchors Aweigh Outfit for Genesis 8 Female outfits, perhaps with a more Navy-like makeover that throws overboard the lace. And your airship engineers might be in the new X-Fashion Uniform 02.

And the airship’s Attack Squadron leader might wear the Myrna 1920’s Vaudeville Showgirl Tuxedo Hat for G8F, in DAZ Studio.

The airship’s enemies might be helmeted with the new Space Spartan Helmet for Poser and M4, by Cybertenko.

… and possibly also be rather amusingly piloting a fleet made up of the cute little Miyazaki-ish Desert Tram for DAZ Studio. This could probably be kit-bashed with the base from some of Cybertenko’s models, to give you an electro-hover-tram with levitation coils underneath.

At CG Trader, a reasonably-priced Owl Skeleton Handpainted, in .OBJ and .FBX. Slap on a pair of goggles and some boots and it could be something for a steampunk museum or laboratory.

Also, some nicely designed low-poly guns, done in 20k, at $9 each at Sketchfab, one and two and three. They’re not going to look great next to a photoreal G8F, but if you’re doing comic-book work with Poser 11’s comic book inking mode then these may appeal.

Second World War Roadsigns. Could probably also be adapted for a Fallout / Mad Max setting. Also a new set of Airstrip Accessories and Base/tunnel entrance with guard-hut and barrier, from the same time period.

dForce Bliaut for Genesis 8 Female, a medieval outfit which at a guess looks about the 11th century, Northern France?

And a realistic ancient castle ruin and mound, possibly more suitable for backgrounds than closer framing.

Watchmaker house for Poser. Nice work, as always, from 1971s. It looks like it could use a set of material makeovers for the four seasons, plus a Christmas-colours set.

Yana for Genesis 3. Looks like she would be a characterful candidate for a storybook heroine.

BBarbs continues to add to her fine set of realistic poses for G8 Young Child.

Candy-stripes for the HiveWire Horse, for Poser.

I’ve yet to try to get her over to / into Poser 11, for the Comic Book mode, but I assume she’ll go.

A new set of Animations for the HiveWire Big Cat. I guess you might also get something from these if you tried them on the Housecat, too.

Message-Shirt for Genesis 8 Female. A G8 shirt that lets you easily apply your own logo or slogan. Also a similar Magic Baseball Cap.

Iray SurfaceWorx. Easily add dust and grime layers, but keep most of the underlying textures.

OpenClipArt has been down for about six weeks now. The best searchable fallback I’ve found is Public Domain Clip Art which has 13,778 bits of clipart under Creative Commons or Public Domain, though that’s only a sub-set of the apparently 150,000 bits that OpenClipArt had at its demise. So far as I can tell, after extensive searching, no-one was keeping a full mirror or tarball of OpenClipArt at 2019.

Currently free on DAZ, the M4 Hero Pro Pack. This includes the base M4 + the M4 Pro Pack + a load of M4 extras. “Michael 4 Shapes++” includes “Michael 4 Genitalia” and seems to include the vital “M4 Morphs++” pack in a supercharged expanded version — this may even interest those who think they already have the M4 and Morphs++ combo.

If you’re new to DAZ and Poser, and get this, you may want want my tutorial on how to activate and load Micheal 4 and Morphs++.

Also currently free is the original Troll, which is worth having in your runtime as there were many extras and makeovers and freebies made for him.

It’s 2D animation software, now 2.5D on the heads. Just be aware that, once you’re hooked into the Reallusion ecosystem, it can become a very expensive option to get all the features and content packs you want.

3Dream has kindly made SuperFly MATs for a whole lot of Poser hair, and has posted them free on ShareCG.

There’s a new iClone Plug-in Marketplace, for small plugins. Only nine there at present. I’m no longer a regular iClone user, but I like the presentation. Wouldn’t it be great to see something similar for your favourite creative software? Presented in a uniformly slick and at-a-glance way, with comprehensive coverage and everything tested and known to be working. Some software occasionally has such a thing, and there are the stores, but more often the details and links are scattered all over the Web. 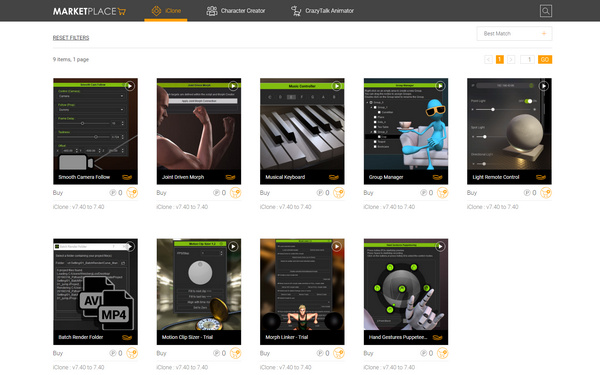