* Richard Rosenman has 40% off his fine Photoshop plugins, many suitable for science-fiction pictures, with a coupon code: BLK40

* Quadspinner has 25% off their Gaea landscape software, until 2nd December.

* The Blender Market has 25% discounts.

M4, V4, Hiro 4 and Aiko 4 base figures, currently on the DAZ Store for $6 in the Black Friday sale. They’re in the “Anime Manga Starter Bundle”. Also, the ++ morphs packs are over in the Victoria 4.2 Starter Bundle and Michael 4 Starter Bundle, both $5 each. Also down at $5 is the M4/V4 Creature Creator Bundle. 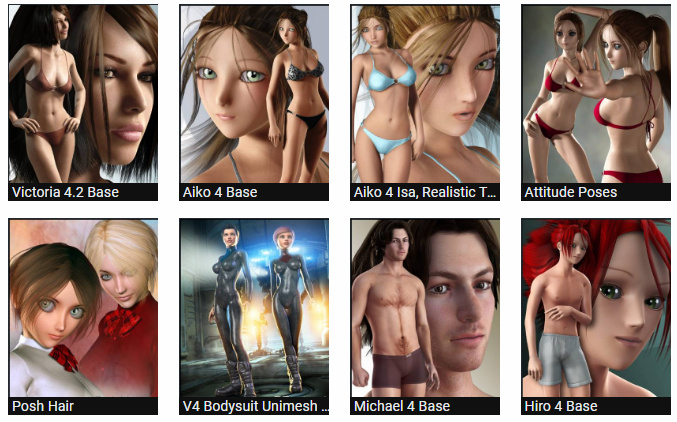 Eugh, now my PayPal really is cleaned out right down to the bare bones, with nothing left for a Blambot font on Monday. Oh well. A final $20 went on three superb Vue landscapes from RaffyRaffy at CG Trader, at 50% off. These had been 30% off, but have gone down even further for Black Friday. 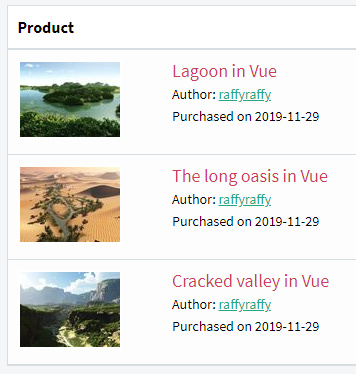 * The ArtStation Marketplace now has its sale on. Seems to be around 50% off on most items, although huge landscapes are only about 10% off. 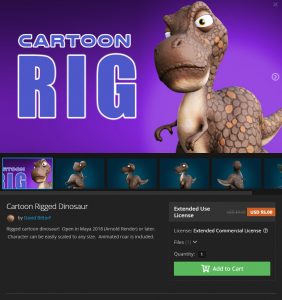 * Topaz Labs has 50% off bundles, today only. Not including Topaz Clean 3, regrettably.

* 50% off Vue subscriptions, including annual.

No sign of any price movement from Comic Life.

* Wizards, to help ensure that your render settings are efficiently set up.

* In-software help for newbies to install new content in the runtime.

* The L’Homme male character, as a partner for the new flagship female La Femme.

* Improvements to the clothing fitting tools.

* “You’ll be able to buy Poser on DVD through Amazon” before Christmas.

* A key maker of the early Poser software, Larry Weinberg, has returned as a senior developer on Poser.

Sounds good, and the DVD will be good news for those in places such as the wilds of Australia or Canada with slow broadband or only metered connectivity. Good for gifting, too.

On the new render Wizards, I’d suggest that the Sketch Designer render Wizard should offer a one-click button to… “Turn off all sketching into the scene’s Background”. Since that’s the thing that either makes Sketch rendering very slow and/or crashes Poser.

A few more additions for the Black Friday list…

* 40% off HitFilm (the “poor man’s After Effects”). Just keep in mind that, as with all video editing, you’ll need a beast of a PC.

Renderosity has just launched their 50% store-wide sale for Black Friday, so there’s a chance to get items that didn’t feature in the rolling 70% selected-vendor sales over the last month.

A few items are omitted, such as PhilC’s $30 Python for Poser manual. A pity, as I’d have gone for that at $15. I guess it was counted as “software” and thus not included.

Still, they managed to ding me for another final $15… 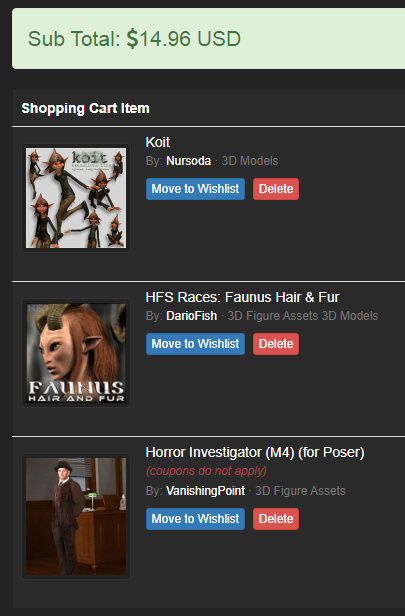 The marketing text on the page is a bit weird. The software is prominently classified under “La Femme Pro – Female Poser Figure”, and the page text opens “Please go to PoserSoftware.com/store to download this free update for Poser 11 owners!”. That double-confusion is likely enough to make newbies back off, wondering if the page is actually selling the software itself or not. But the price shows it to be Poser Pro 11. 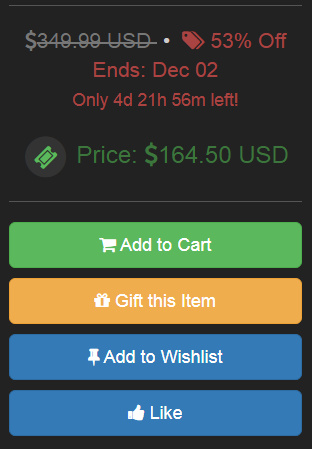 Over at the DAZ Store they have 20% off Gift Cards, for one day only. My Wish List there is also still showing plenty of 50%-70% discounts, though nothing compelling at the low end. The Look at My Hair plugin and RSSY 3Delight to Iray Converter are both 50% off.

The DAZ Store and Renderosity have been at the discounting dance for months now, and have already cleaned out the PayPal reserves of DAZ/Poser creatives who’ve been paying daily attention… but if you still have something left over then here’s my round-up of some Black Friday items of possible interest…

Heavy discounting at Xurge 3D, maker of top-quality armour and uniforms for M4 and V4. 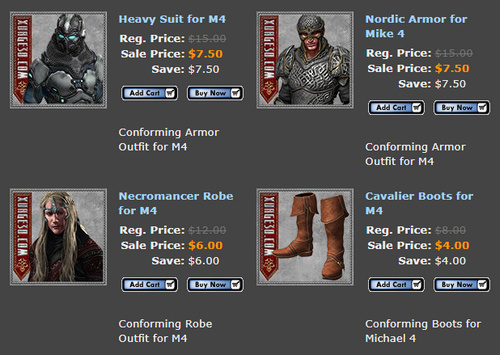 Heavy discounts and a $59 ‘all-you-can-download lifetime offer’, at Teknology3d. Sadly they have a new-look site and my old log-in from a few years ago no longer works. 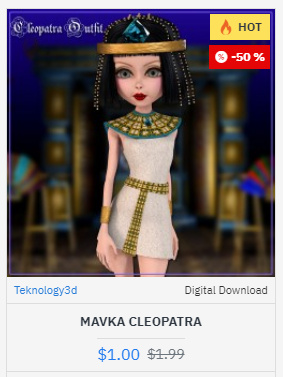 A small sale at Hivewire including AniBlocks for the HiveWire House Cat. Also ‘Ants of the World’ for Poser, which I don’t think I knew even existed. They can presumably be scaled up into house-sized 1950s atomic-mutant ants…

CGTrader has lots of 30-50% off items (but keep in mind that they add local Sales Tax at the Checkout!): 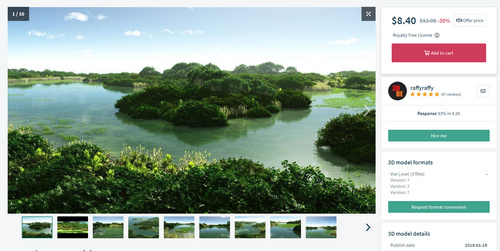 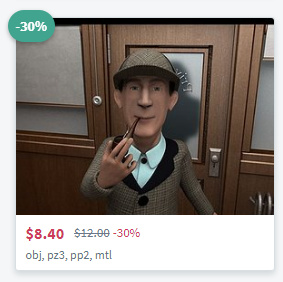 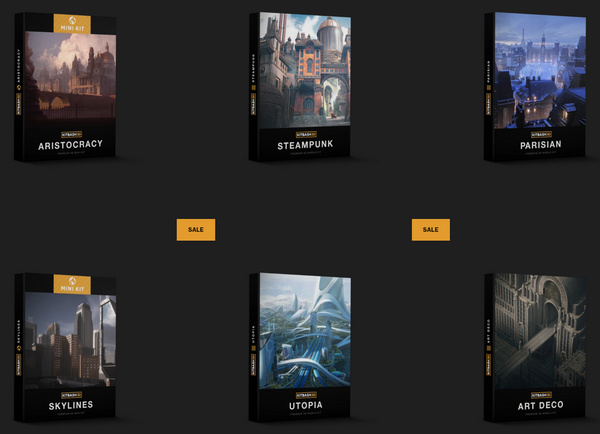 The XFrog store has 60% off. Contrary to the name, they make quality realistic 3D trees and plants not frogs.

An “up to 70%” sale on around 5,000 game assets in the Unreal Marketplace. There may well be some stuff that can be got out to .OBJ, of interest to those who need large lightweight landscapes done in geometry rather than as domes / backdrops. 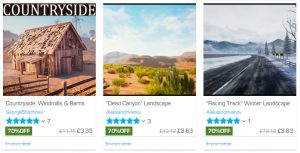 And “up to 50% off” at the similar Unity store. The Diesel machines constructor kitbash kit apparently has 220 items, for instance. 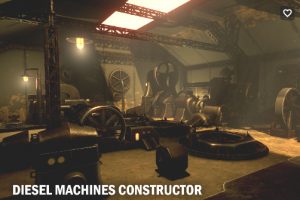 No sign of anything happening at the ArtStation store.

GarageFarm.NET has “up to 40% extra” render credits for its render farm. They support Vue 2015 and 2016, but not the new subscription Vue.

Blambot comics lettering fonts have a 30% off Cyber Monday sale coming up. No sign of anything happening at ComicCraft.

Slight discounting on PzDB with 1.2 down to $32. Highly recommended if you have a huge Poser runtime.

Serif / Affinity has 30% off its budget “Adobe-killer” products, including Publisher and Designer.

No signs of any movement on the price of Comic Life 3 or JitBit Macro. But Clip Studio Paint is now 50% off. Keep in mind that only the EX version has multi-page support, and that Comic Life has multi-page and is far easier to use.

And lastly, completely free… the new Krita 4.2.8! Krita is also good for comics production, if you jiggle it a bit.

If you’ve found this and other recent posts useful, please consider supporting me on Patreon. Thanks!

Just a few easy in-situ clicks to replace a texture and all instances of it, with the option to shift Gamma too.

Not sure that it works with Poser 11, though. It doesn’t give errors in Poser 11, but it only lists one material on a selected character rather than the expected enormous list.

Blambot will be having a sale soon. They specialise in digital comic book fonts, quality but at a significantly lower cost than ComicCraft.

Their sale will start next Monday, albeit only as a 30%-off sale, and will run through 6th December 2019.

I like the look of the $20 Big Bad Bold, although my Black Friday PayPal stash has already been drained by sub $5-ers at Renderosity and DAZ. 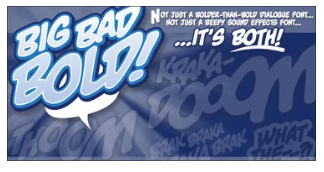 I’ve had time to toon-test a recent purchase, the Daedalus Sky Mercenary for M3. Picked up for $3 from the DAZ Sale. 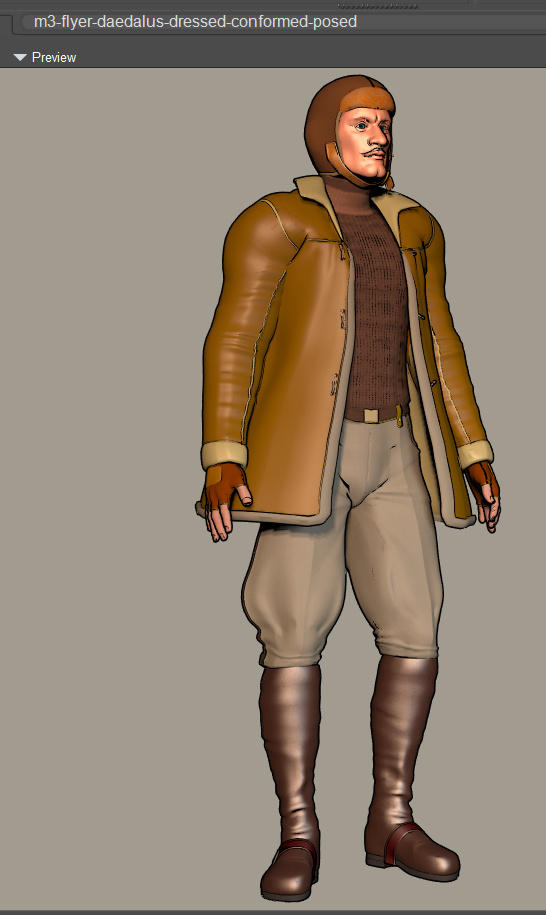 It all worked fine except for the inner uniform-jacket, which has un-solveable problems at the neck on even a standard t-posed M3. Possibly it was made for an earlier version of M3? Or for an M3 with a particular set of morphs applied? I replaced it with a sweater from the UziliteM3 BAM set, and did the “apply the b&w bump map to the diffuse” trick to lighten it up and show ribbing in Preview. Standard Poser 11 “Basic Materials” were dropped on the trousers and boots, these being linen and leather, so it looks better in real-time Preview. Predatron’s M4 Max Muscles mustache was added as a final touch, also picked up for $3 in the sale.

Still in need of an inner waistcoat, and a lot more optimisation of materials for Comic Book Preview mode.

Some useful tips when searching for steampunk menswear: the Americans call a waistcoat a “vest”, a jumper a “sweater”, and trousers “pants”. Similarly, “mustache” and “moustache” are easily confused.

It’s the Dante78 70% sale at Renderosity. While you may think that your bulging Runtime can’t take any more medieval stuff, this is top quality and the prices are very low. 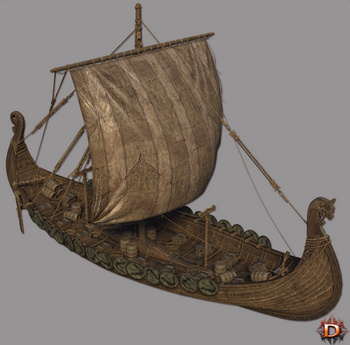 Advice from FSMCDesigns on the forums for DAZ users of these Poser models, re: iRay rendering of these in DAZ Studio…

With Dante78 products, turn down the Specular and change the color in the Diffuse channel to white” for iRay.

Problem: You have a massive .ZIP or .RAR file, perhaps an old archive of Poser content you archived a decade or more ago. It has a structure that looks like this:

What you want to do: You want to extract just the sub-folders named “Runtime”, combining them into a single new folder named Runtime, while keeping their lower directory structure intact-but-merged. Because that’s what you’re going to need to do, to merge them back into your main Poser Runtime folder and thus make them usable.

The solution: It can be done quite simply in Windows, and without freeware or command-line code or PowerShells. And without several-hundred tedious manual click-copy-merge operations.

1. First, simply extract the entire .ZIP file. (Don’t waste time messing around with tricky command-line controls for the like of 7-Zip and WinRAR, trying to extract just the Runtime folders. You may be able to do that, but you won’t also get the merged sub-folder structure you want).

2. Now open the resulting extracted folder with the standard Windows Explorer. Add there a new empty sub-directory called Runtime, as a newly added folder among all the extracted folders. We’ll be using it a few steps later.

3. Now use Windows Explorer to keyword search inside your huge extracted mega-folder for the word “Runtime”. A huge list of sub-folders will appear as the search results…

4. Shift-click and scroll on these found Runtime folders to select them all. Then right-click and copy-paste them into the top level of your newly extracted folder. NOT directly into the new Runtime sub-folder we just created. Windows 8’s mighty cyber-brain then spots the empty Runtime folder and thinks… “so that’s where all these same-name folders should go, ok let’s merge ’em all in!”

This method works and takes advantage of an auto-merge feature in Windows, which many Poser folks used to manually dealing with installing to runtimes will be aware of. If you copy-paste a folder with the same name, it merges without any fuss. Thus, in this case, your 250+ Runtime folders become one, while retaining their sub-folder structure…

All our Runtime folders are now nicely amalgamated, and ready for a final check and then to be copy-merged in the same way into the main Runtime used by Poser.

Just note that those still on Windows 7 may get a prompt about merging. On Windows 8, you won’t, it’ll just go ahead and do it. I’ve no idea about Windows 10, but I assume it behaves much the same as Windows 8.