One of the problems with the old MojoWorld software is that, even when you full-screen the software, the “instant preview” window is very small. Here is that preview window, seen actual size on a modern 1920px desktop monitor…

So tweeny-weeny, so cute, but… a pain on the eyes and the neck, on a big widescreen monitor! The user can do certain things to improve it. In its Settings controls you can set render size to: ‘Large’ and ‘Auto-update’. While its ‘Render Quality’ is best left at Default (it makes little difference, but is slightly the fastest of the three options).

So the user can do some things to improve it, but can’t actually enlarge its size. Wouldn’t it be great to get a bigger view? Like this… 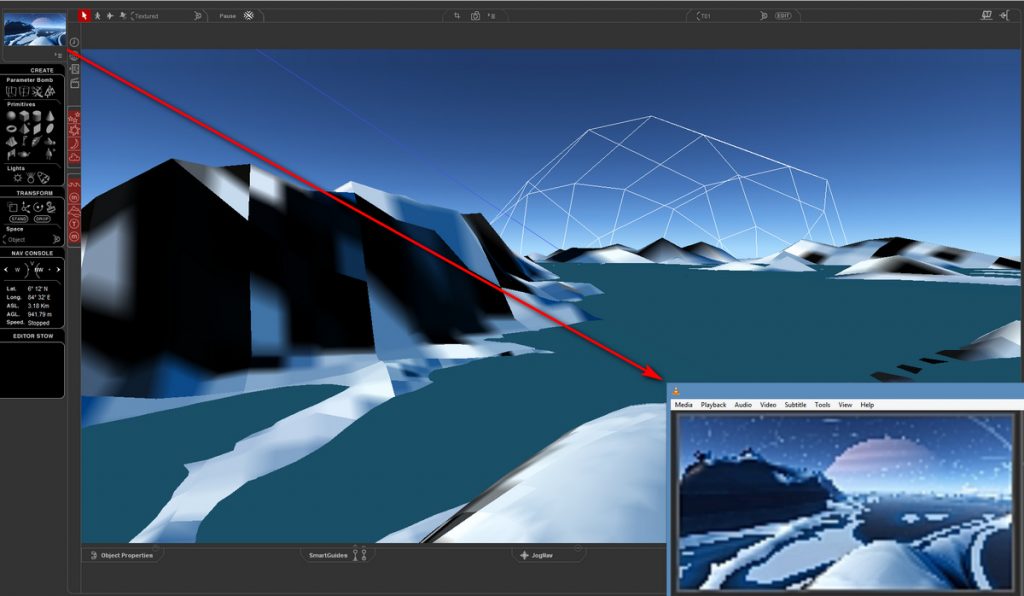 Is there some freeware that can do that? What about a Windows magnifier software? Nope… I looked for hours and there’s absolutely nothing that can grab a section of the screen and show it in an enlarged fixed window like this. They all want to play “follow the cursor, and show what’s under it”.

There is a solution, and it comes from a surprising direction. It’s the popular free video player VLC Player. Here are the instructions…

1. Launch the latest VLC Player. From the top menu, go: Media | Open Capture Device | Capture Mode | Desktop | 12 FPS | Play. You have now set up a live video-stream of your desktop. Don’t worry, it’s not being sent to some dodgy blokes in Ecuador, and is staying within your PC!

2. From the top menu, go: Tools | Effects | Video Effects | Crop | then you will need to play around with the pixel offsets to suit your screen. You may need to ‘jiggle it a bit’ until the section of the screen you want to isolate pops out into an ‘enlarged’ mode, but you’ll soon get the hang of how its ‘indenting the screen’ and thus enlarging it. Here are my settings on a big widescreen desktop monitor…

Optionally, you can also have VLC do a very slight real-time sharpen, which is controlled from the same Video Effects tab — the Sharpen slider is found under ‘Essential’. You can even send the image into black and white and slight change the contrast, to get a sense of how the greyscale values of the picture will visually “read”.

3. When happy with the view, effect and magnification level, grab the VLC Player window and place it in the bottom right of the screen (as seen above). Then go to the top menu and set: View | “Always on top”. This forces VLC to be visible, even when MojoWorld is the active window.

You then work with MojoWorld as usual.

Optionally, in MojoWorld if you mouseover on the native instant-preview window, then you can click once on it to “Enhance”. That’s pretty quick on a modern PC, little more than a second. After doing that Enhance, here’s a comparison at actual-size of the two views, the native instant preview and the VLC stream of that section of the desktop… 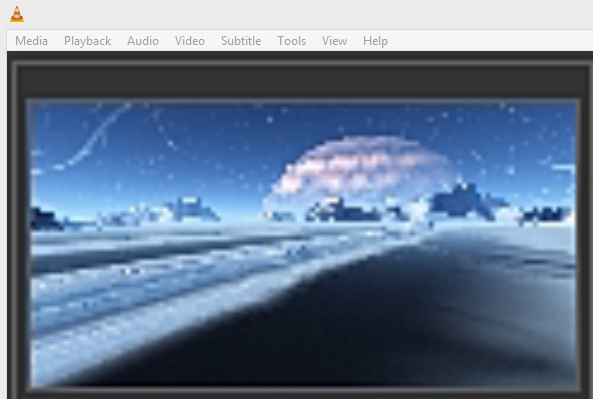 Not ideal, but better that the native preview. You’re getting an entire planet rendered in WYSiWYG in near-real-time, and as such some pixellated blockiness seems a small price to pay.

There are a few drawbacks:

1. You loose instant access to your “random cam” dice buttons, because the corner of the VLC Player windows is covering them up. If you want access to them you have manually grab the VLC Player window by its top bar, and slide it down for a few moments, then manually side it back up. But that’s easily done, and then you can re-select the MojoWorld window and go back to the JogNav buttons.

2. You get a slight ‘mouse cursor flicker’, due to VLC capturing the stream.

3. It’s overkill for fast-rendering planets. On a fast modern PC you’d get a preview that’s nicer and almost as fast by just doing a quick 600px render on the lowest settings.

The above technique should work on any older software where the instant preview is of a fixed size.

Carrara 8 is DAZ Studio's official 'big sister' software.
Carrara loads all DAZ and Poser characters and scenes,
and supports LuxRender for top-quality realistic rendering.
« Freebie: Render in Background for Poser 11 Standard?
Hair Strand Designer »
Welcome to the planet's only regular blog for the 3D software DAZ Studio and Poser! The design of this blog should adapt perfectly for reading on your iPad, Kindle Fire, digital tablet or smartphone. Enjoy!
Please become my patron on Patreon.