Whatever you may think about ‘the ultimate price-tag’ on Reallusion’s software, or the radical UI makeover and new render-engines in iClone, as a company they do provide excellent support and tutorials. And the new Cartoon Animator 4 is fine software which is also useful for comics makers of a certain type. Today Reallusion uploaded an hour of detailed new tutorials on the vital skill of how to set up a “360 head” in their new Cartoon Animator 4 software… 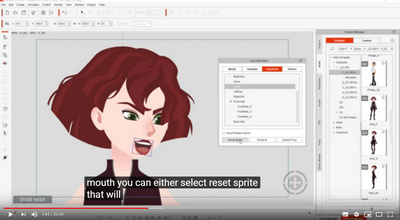 There’s also a new 20 minutes video that dives into the details of all the Face Key Editor Enhancements in CTA4, which offers the user detailed creative control over the resulting frame-by-frame animation.

Carrara 8 is DAZ Studio's official 'big sister' software.
Carrara loads all DAZ and Poser characters and scenes,
and supports LuxRender for top-quality realistic rendering.
« DAZ Studio 4.11 – new strand hair and a denoiser for iRay
Release: MagicTints 1.0 »
Welcome to the planet's only regular blog for the 3D software DAZ Studio and Poser! The design of this blog should adapt perfectly for reading on your iPad, Kindle Fire, digital tablet or smartphone. Enjoy!
Please become my patron on Patreon.