I see that the PoserFusion plugins for Poser 11 are still available for me, via the old Smith Micro Download Manager — open the SM Manager with your special PoserFusion plugin serial number (not the regular serial number). There are four plugins which allow import of Poser scenes to Cinema 4D, Maya, 3DS Max, and Lightwave, but you’ll need to step back a few versions on these big-beast programmes. For instance, the PoserFusion plugin for Cinema 4D still works fine with C4D R17 (update: and R18 and 19, or so I’m told). Vue 2016 R4 didn’t need a plugin, with Vue able to natively import a Poser scene. The new subscription version of Vue can still handle easy import of Poser scenes.

I found that all four PoserFusion plugins were lurking on my hard-drive, downloaded some time ago, in my: C:\Users\USER_NAME\SmithMicroDLM\Downloads\release\Poser11\PSFU\win directory.

On cut and pasting these out to save them, and re-starting the Manager, I was still able to access them afresh via download… 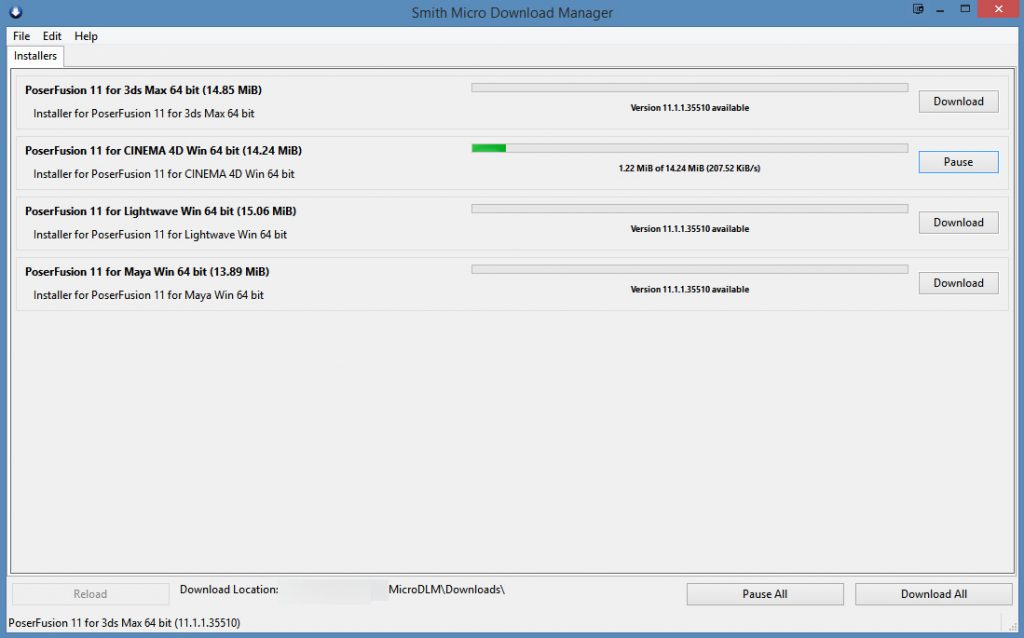 So this could be your last chance to get them, as I imagine that the SM Manager will cease to recognise serial-numbers fairly soon. Apparently Renderosity are not going to maintain these plugins, but that might just be a forum rumour. There’s a certain amount of mis-information flying around at present and I’ve seen nothing official on it.

1. Top menu in C4D. Plugins | Poser. Tell C4D where to find the Poser runtime, if needed.

2. Clicking this adds a ‘Poser Object’ to the panel showing the list of scene content and materials, so that C4D knows how to handle what it’s about to have loaded.

3. In the panel beneath, Find “Object Properties”. Click the “…” button and load your Poser file from there.

4. Then once the Poser scene has loaded in, it will lack materials. Click “Load Materials” to have C4D go get the Poser materials from your runtime and load them onto the scene.

You can’t send cameras across, so you can’t later composite 1:1 with a C4D render and a Poser render.

For those finding this post in the future: this relates to the handover of Poser 11 from Smith Micro to new owners Renderosity, which happened this weekend with the 11.2 update.

« Poser 11.2 install – an unofficial guide to the free content bundles
Brom for $10 »
Welcome to the planet's only regular blog for the 3D software DAZ Studio and Poser! The design of this blog should adapt perfectly for reading on your iPad, Kindle Fire, digital tablet or smartphone. Enjoy!
Please become my patron on Patreon.