I recently finally got around to installing the latest DAZ Studio version 4.12.0.8x beta.

iRay is definitely significantly faster. I use the Scene Optimizer plugin + the CPU, for iRay renders to screen-size (1200px tall). Contrary to popular belief, you don’t actually need a Nvidia graphics card to run iRay. The latest DAZ Studio makes this approach significantly easier, integrating iRay RTX 2019.1.3 — which the Nvidia developers have stated on their dev-blog runs fine on non-RTX cards and should also give a 2x speedup of CPU-only rendering of iRay. In my tests, it’s definitely faster.

Also interesting, in the most recent releases of DAZ Studio, is the Strand-Based Hair. This seems to be production-ready now, judging by this Store product preview of the just-released Plushies 2.0: Scamp The Fox from Lady Littlefox… 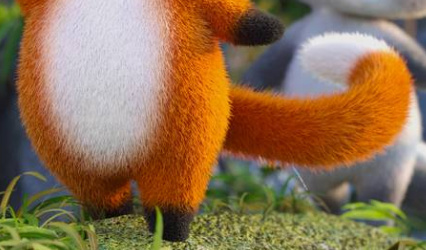 It’ll be interesting to see what sort of render-time hit this fur type makes, if any, and if render-time increases with strand-length / curliness or not. Also how it compares on render-time with a Look At My Hair preset, and with Poser’s Hair Room fur.

Carrara 8 is DAZ Studio's official 'big sister' software.
Carrara loads all DAZ and Poser characters and scenes,
and supports LuxRender for top-quality realistic rendering.
« KitBash3D – free cyber-city minikit
Sixus1 – 70% sale »
Welcome to the planet's only regular blog for the 3D software DAZ Studio and Poser! The design of this blog should adapt perfectly for reading on your iPad, Kindle Fire, digital tablet or smartphone. Enjoy!
Please become my patron on Patreon.