DAZ Studio 4.5 has been released but only as a “release candidate” (i.e.: a nearly-finished beta version)…

This release candidate is available to all customers […] we recommend installing only one of either 4.0.x or 4.5.x on the same machine.

Among the new features that look important are…

* Viewport speed dramatically increased. For many viewport interactions, speed will be 2-5x faster than DAZ Studio 4.0.

* FBX files can now be round-tripped through DAZ Studio, including rigged and animated items in the scene.

* New “Ready to Render” scenes have been added as part of the content that installs with 4.5.

By the way, what is wrong with DAZ’s website? All their forum links are broken when accessed via Google, the affiliate banner buttons are all broken, and their Store currently looks like this… 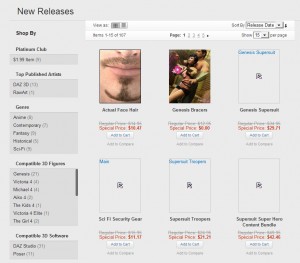 One thought on “DAZ 4.5 – available now as a free release candidate version”