Perhaps the least-documented feature of Poser is the ability to send your Sketch Designer sketch over to the Corel Painter software, and have Painter re-paint it stroke-by-stroke. The script runs in Painter with whatever Painter brush and brush-size is currently selected.

The Poser 11 PDF Manual merely says that this feature has been ‘tested with Painter 6, but is not guaranteed to run in later versions’.

Here’s how to do it. Turns out it’s remarkably easy to get running, and is potentially very powerful.

First make a Preview render at about 1800px. Doing this will ‘set’ the Sketch Designer’s internal real-time Preview window to the correct dimensions.

Then go to: Top Menu | Render Settings, and open the Sketch Tab. Click the “Sketch Designer” button. Find a saved custom Sketch preset you’d like to try and preview it. Suitable? Then save your Sketch to a Painter .txt file rather than a render. Here I tried a more painterly sketch preset.

When you do this Poser’s Sketch Designer will run the Sketch again in its internal Preview window, then save the script for that out as a .TXT file. This file will embed the size of the picture the sketch is intended for, in its header. If you want to see what the lines of the script look like, just open it with Notepad. 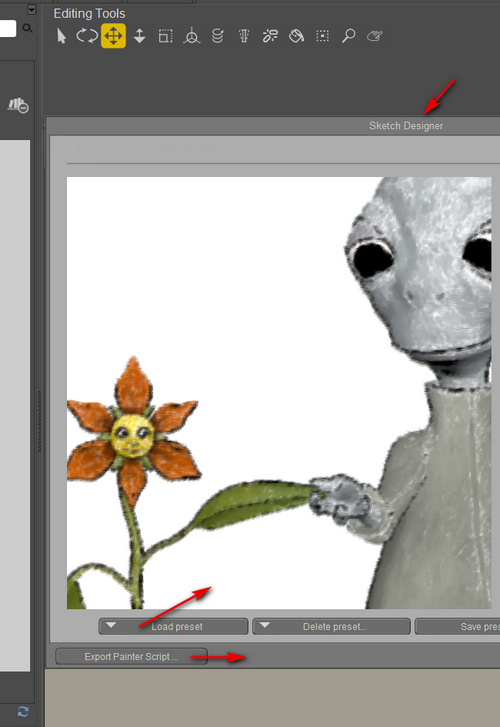 Open a new document, ideally at the same size as the Poser Sketch Designer was using.

Go: Top Menu | Scripts. This opens Painter’s Scripts panel. The panel is very simple and obvious to use. Importing the script is then very easy, and playing the script back is simply a matter of choosing a suitable brush and pressing “Play”.

The drawback is that the painting/sketching process will be far slower than it is in Poser, and what took 10 seconds in Poser may take 30 minutes or more in Painter. Yet Painter is no longer the circa-2003 ‘Hog-beast That Ate Your PC’, and as such a script can paint lightly in the background… while you do other stuff on the PC with ease. Note also that newer versions of Painter have significantly boosted their script-running speed.

I found that a Poser Painter Script cannot be paused or stopped once playing, despite the Stop | Pause | Play controls on the Script panel. The manual’s suggestion of using ‘Ctlr Alt .’ to force a script to stop did not work either. So, on an overly-long playback, your only option is to Ctrl-Alt-Del in Windows and kill Painter. Possibly this is a problem only with Poser scripts?

Despite the lack of speed in playback, the advantage of using Painter is that it is possible to replay the script with different Painter brushes and on different ‘paper’ type. For instance, here is the ‘Blumi and Onats’ picture in several brush-types and tip-sizes on plain paper. 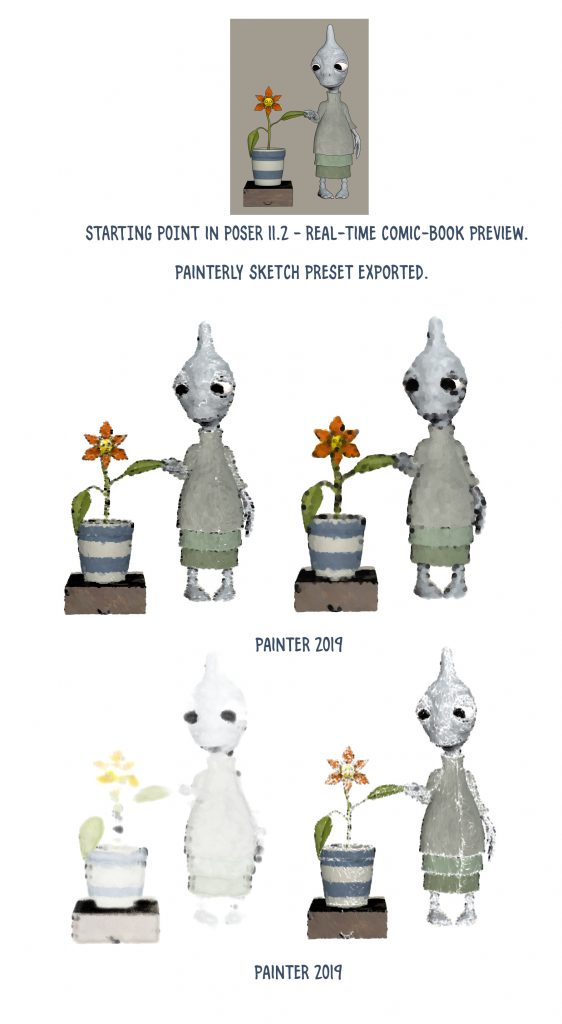 The Poser script plays back with whatever Painter brush is currently in use. Above are several examples of using different brushes on plain paper.

There is no indication that a script has finished running through its painting process, other than that the brush-tip icon returns to the screen and is ready for you to do manual painting or inking.

It appears that there is no way to control playback speed of the script, and I assume it’s locked to how fast the chosen brush can go on your PC. It seems that some types and sizes of Painter brush will run through the script slightly faster than others, but the difference is not great. Changing DPI does not affect speed. Expect a 25 minute ‘paint’ on a couple of simple figures.

The Poser script ‘knows’ what colours to use, since these are specified in the script along with the brush-tip position and direction of stroke. Some brush/pen types, such as Mechanical Pens, obviously have just black colour (because they use black ink).

A strong advantage of Painter is that one can run the same script on different layers with different Painter brushes, and thus can “build up” a more complex painting or ink drawing. Its layer stacking and blending system is standard, much like Photoshop, with a few Painter-specific blending modes.

Painter can apparently ‘scale up’ its scripts on the canvas, by up to 4x. It seems that one can’t simply use a larger canvas size, and have script’s brush-strokes scale themselves accordingly. It looks like you have to edit the pixel width and height values in the script itself, to scale.

Thus, on test I find that the Poser Sketch Designer to Painter workflow is still useful, and is simple to manage. The work will come in your initial testing of Painter brushes, to find a couple of good ones that Poser can’t do natively. Mostly that’s going to mean soft bleed-over watercolours, as tried on the demo-picture above, or perhaps even thick gloopy ‘impasto’ paint. One could probably nail down a workflow for something quite impressively ‘hand-made’ in watercolours, given a day of experiments. But for speed leave it to Poser to do the super-quick pencil sketching, graphic charcoals and inks, fine dash-shading, and basic under-painting for manual over-painting of digital oil-paintings. Also consider if you can get something similar and faster with a real-time Preview render in Poser, by pushing it through either: i) the excellent G-Mic filters in the free Krita 4; or ii) the painting presets in the paid-for Dynamic Auto-painter 6 (DAP).

Carrara 8 is DAZ Studio's official 'big sister' software.
Carrara loads all DAZ and Poser characters and scenes,
and supports LuxRender for top-quality realistic rendering.
« DAZ and Poser content survey – October 2019
Posers on eBay »
Welcome to the planet's only regular blog for the 3D software DAZ Studio and Poser! The design of this blog should adapt perfectly for reading on your iPad, Kindle Fire, digital tablet or smartphone. Enjoy!
Please become my patron on Patreon.