In the absence of a good ‘Matcap’ script for Poser, a strong scrubbing with the Topaz 3 Photoshop plugin remains the best way I know of to quickly strip grunge off default textures. While retaining colours and a level of crispness. The user saves out a Preview render of just the colours, rendered under a flat IBL light. Then loads this render to Photoshop, where it goes through Topaz Clean 3. 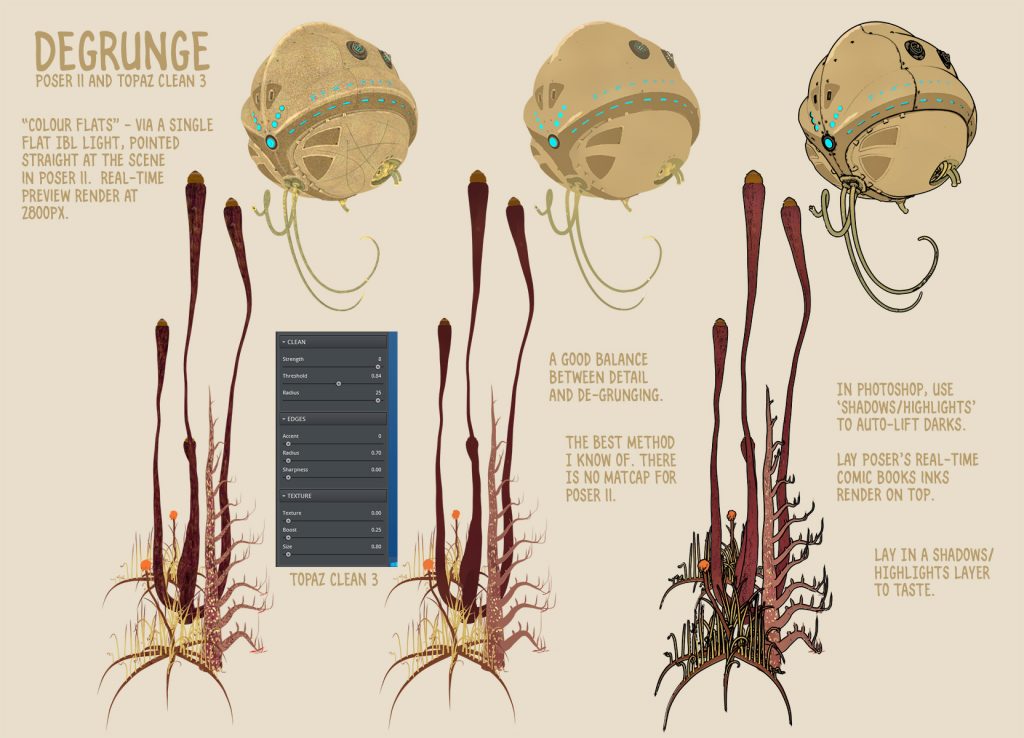 For models and characters that are used repeatedly in comics production, one could also run Topaz on the Firefly materials themselves, and thus make an ad hoc set of textures more suited to tooning.

A matcap script would examine each texture in a scene and then automatically replace it with a good approximation of the average colour for that material zone. The effect would be visible in real-time Preview mode, and might even have a limit — within which the darkness or lightness of each replacement colours would be constrained. Thus preventing jet blacks or too pale colours.

While we’re waiting for that, Topaz is a moderately-costly $30 — but might just be less on the forthcoming Black Friday / Cyber Monday weekend. There may be something in the free Krita’s G’Mic filters that can do this, but the great advantage of a Photoshop plugin is that it can be automated via Actions.

Update: Sadly at summer 2021 Topaz Clean 3.x appears to have been taken off the market, so that Topaz can focus on their AI software. It is not in their $90 Topaz Studio 2, but was in the earlier Studio 1 which ran on Windows 7 up and could also do batch. It may have been removed from Studio 2 due to Windows 10 problems?

« KeyShot 9 webinar
On the blog being sluggish to respond »