Some may remember F-clone from about three years ago. It’s “expression capture” software that outputs to the DAZ/Poser .PZ2 file format. When last seen F-clone was in an over-priced $199 version 1.0, and the results were apparently a little basic. 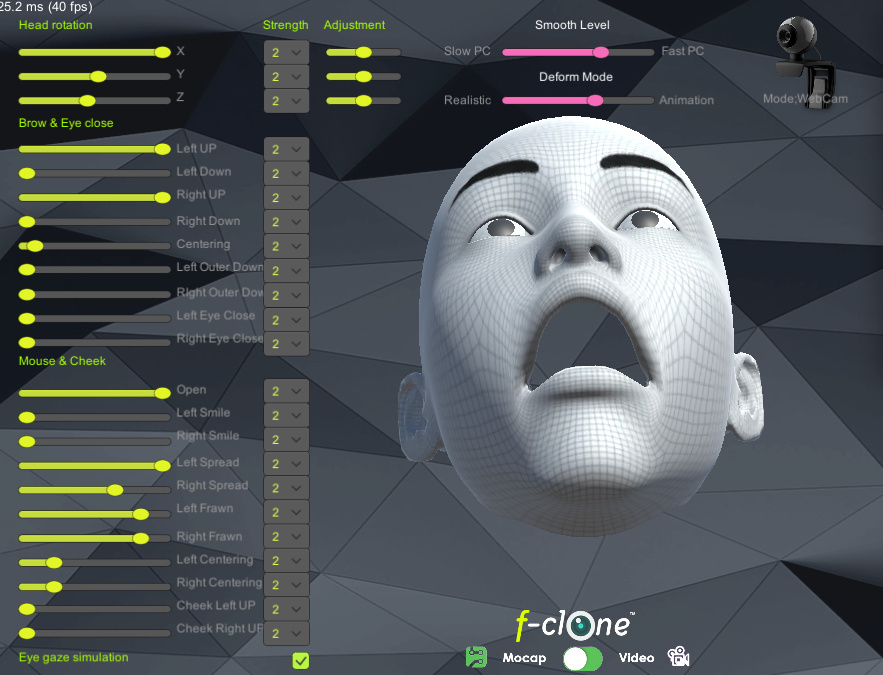 Now it’s in 1.12, has a free trial, and is currently on sale for $33 for personal use. It’s nothing to do with iClone, despite the name.

I got it working with an 2008 HD (1280px) Microsoft zoom-able webcam I picked up in a sale way back. I was pleased to find there are now Windows 8 drivers for the cam at last, yay! So it was worth keeping it in a drawer all these years.

Even in terrible lighting conditions F-clone gave me results. However, once the facial data was captured the “Video processing…” then took so long, even on a mere 20 second clip, that I gave up on it for a few hours. Possibly it doesn’t like also capturing audio as well as video, though it appears to have this capability.

But returning to it after a PC reboot solved these problems instantly, and another 17 second capture resulted in a near-instant saving out of the finished .PZ2 animation to the desktop.

I then dragged and dropped the animation into DAZ Studio and onto a Genesis 2 base figure. I left “Limits on” for the figure and got a nice subtle idle animation. I then tried a G3F and turned “Limits off” on import of the animation, and got a much more expressive animation. G8F also took the animation, and the movement was quite nice. But the best was the G3F. Apparently G3 was the first Genesis to have facial bones, and the F-clone software is obviously targeted on those. The clue is in the name of its file output: F_Clone_Daz_Genesis3_0.pz2

In Poser there was very little success, obviously because the animation process was targeting Genesis 3 which is a DAZ figure. Though Doctor Pitterbill took head and eye movements quite well, but not the mouth movements. But for some that may actually be a feature, since it would allow you to lay in another “track” of mouth animation. That was about the limit of the success in Poser, with limited testing on A3, V4 and M4, and La Femme.

So… I was idly expecting F-clone to only target the older DAZ/Poser characters, but I found the reverse. It works on Genesis 3 to 8.

For $33 and with very easy .PZ2 output, it may be worth trying the free trial if you need to make long facial animations for your G3-G8. It also has sliders for smoothing and boosting, and for targeting of “toony faced” characters. With better light, in a proper mini-studio, and with calibration, you may find it has value for more expressive / subtle animations too. Perhaps even lipsync, though there are likely better tools for that if you’re serious about story-and-dialogue movie-making.

The .PZ2 files are human-readable text, so a little converter utility seems possible.

Incidentally, it seems there’s no cheap/free software that can input any still picture or short video clip of an expressive face, and then pop out a .BVH which can be dropped onto a 3D character so that they take the same expression(s). Perhaps there should be? Unless perhaps it’s actually in F-clone and I just haven’t found that feature yet?

« Superhero or Supervillain?
RTX for Poser? »
Welcome to the planet's only regular blog for the 3D software DAZ Studio, Poser, Vue and other similar software. The design of this blog should adapt perfectly for reading on your iPad, Kindle Fire, digital tablet or smartphone. Enjoy!
Please become my patron on Patreon.