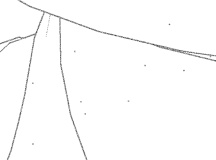 “As you can see, we have tiny unwanted speckly dots. These tend to appear the closer the camera is to objects or characters, are somewhat uniformly distributed, and are specific to a Firefly line-art render mode and to medium and close-ups camera framing. These speckles have been a long-standing problem with Poser ‘toon outlines’ renders.”

The blur method(s) I proposed worked, but were not ideal. They can damage the integrity of the lineart by making it grey out. There’s also an ancient free Polaroid plugin that works, but not on .PNGs and it can often eat into the line edges.

But I’ve now finally got a robust solution for lineart, after much searching. It’s free, and it does not change the lines.

What you want is the free Paint.NET graphics software, which runs on Microsoft’s NET framework and was intended as a replacement for Windows Paint. Then you install its fine Remove White Plugin and its Stray Pixel Remover plugin.

Paint.NET plugins are simple .dll files and are manually installed in its ../Effects/ folder. “Remove White” is then found on the Paint.NET menu under Adjustments | Transparency, and “Stray Pixel” is found under Effects | Object.

“Remove White” knocks out all the white in an image, leaving you with just the line-art and the speckles. “Stray Pixel” then examines the image and if it finds stray specks, stray kind-of lines actually made from tiny separate dots, or tiny islands surrounded only by transparent pixels, then it knows they’re not lines… and deletes them. There are adjustable sliders to control the plugin’s strength. If you then want the image back on white again, simply add a new layer behind, and fill it with white.

Sadly it’s not a Photoshop-native solution. Such a thing does not exist, amazingly, though there are three dead non-working ones from years ago. And Paint.NET doesn’t have Photoshop’s record-able Actions, and thus can’t automate the process into a single click including saving out the cleaned .PNG file. The best it can do there is the limited filter-automation plugin ScriptLab. This will at least save you a few clicks.

This fast and robust solution may also help those bringing hand-drawn line-art into the PC for digital inking, especially if they find their scanner software is not up to the job of removing every single stray dirt speck from the scan.

« Just call me Leeloo…
Release: AKVIS Decorator 7.0 – 3x speed boost »
Welcome to the planet's only regular blog for the 3D software DAZ Studio and Poser! The design of this blog should adapt perfectly for reading on your iPad, Kindle Fire, digital tablet or smartphone. Enjoy!
Please become my patron on Patreon.