How to create, find and position a billboard prop in Vue 2016:

1. First, render your prop and save it to the target .PNG file you intended for your Vue scene. If not using Vue itself then this means using software that enables the saving of a clean .PNG with an alpha, with no fringing at the edges. It may also mean approximately matching the lighting in your Vue scene. Or, if you have no idea of what lighting you’ll eventually end up using, then at least have fairly neutral lighting. The output size doesn’t need to be huge, maybe 1800px. I’ve no idea if DPI affects such things, but 300dpi may be a good standard to work with.

2. Launch Vue and go to the top menu. There go: Object | Create | Alpha. Shift + H will do the same on the keyboard, and can also be tied to a mouse-move gesture. 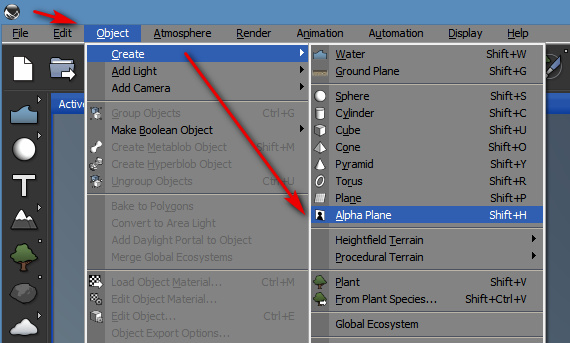 3. The Import window will appear. Those who learned their 3D with the old Bryce interface will be familiar with the cryptic mini-buttons look. Note that one of the tiny buttons also lets you change the gamma of the import image at this point. (I’m using Vue 2016 R4. Apparently R5, R6 and the new subscription Vue have changed the UI, and this may be one of the changes). 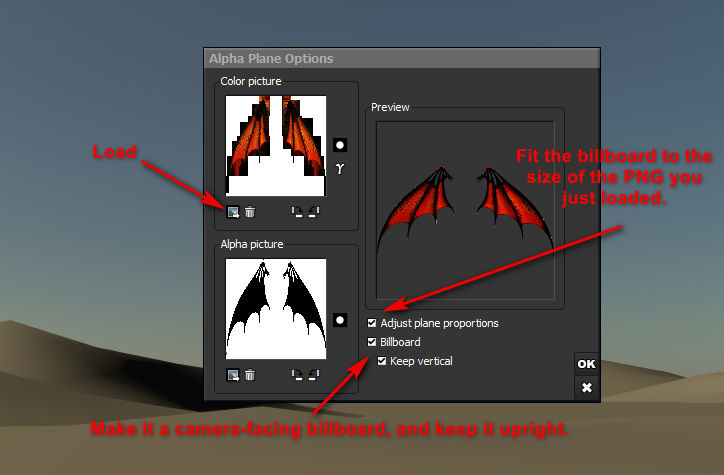 For some reason, this import operation will not always seem to work:

B. Appears not to have worked, but in fact has: Far more often this ‘blank billboard’ does not appear. It is in the scene, but it is either up above the camera viewframe or way off to the side. If this seems to be happening, just carry on as usual.

4. If the new billboard is indeed nowhere to be seen, and cannot be framed, then switch to the Top camera view and zoom way out. Most likely the billboard loaded miles away from the camera. This is the case, for instance, even with the default Vue ‘starter’ desert scene.

In the Top view, re-position the billboard in front of the camera. Then switch to the Side view, and do the same again. 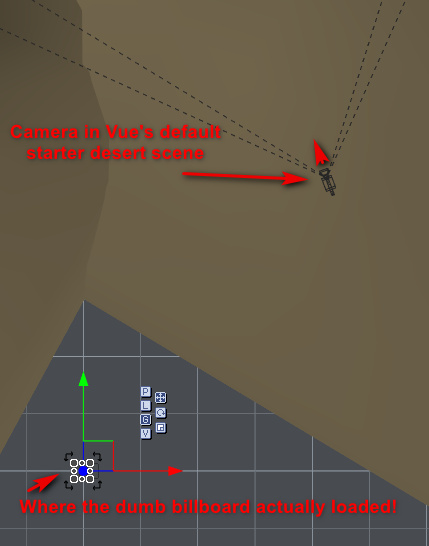 To save such fiddling it would be nice to have a “place the selected prop directly in front of the current camera” Python script. But I’ve yet to find such a useful thing for Vue.

Update: I made a Magic Object Mover for Vue script, to help with this problem.

5. You’ll then probably also want to adjust the tilt and orientation of the billboard. It’s supposed to be automatically camera-facing and upright, and it sort of is, but will still often appear awkwardly tilted in the camera view and will need manual adjusting. 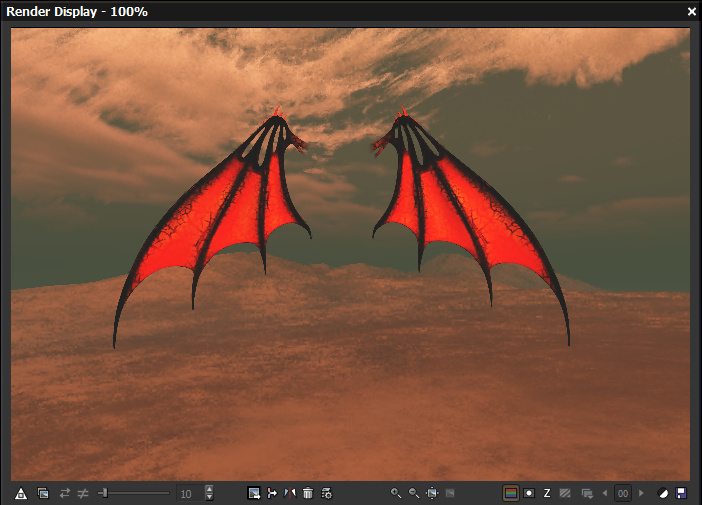 * You can scale up the billboard like any other prop.

* It can cast shadows that look like its shape, not like the rectangular plane the shape is inside.

* You can also point a spotlight at it to adjust its brightness. Go: Lights icon on toolbar | Right-click and hold | Spotlight | Edit | Influence | ‘Only objects selected’…

* A very low-res placeholder may appear in the viewport, depending on the power of your PC. On doing the final render, the high-res image will be loaded.

* You can save the billboard to the library as a .VOB prop, by right-clicking on it and saving it.

Carrara 8 is DAZ Studio's official 'big sister' software.
Carrara loads all DAZ and Poser characters and scenes,
and supports LuxRender for top-quality realistic rendering.
« Tutorial: seeing the light in DAZ Studio
Magic Object Mover for Vue »
Welcome to the planet's only regular blog for the 3D software DAZ Studio and Poser! The design of this blog should adapt perfectly for reading on your iPad, Kindle Fire, digital tablet or smartphone. Enjoy!
Please become my patron on Patreon.