The Poser library manager/finder alternative P3DO Explorer Pro 2.8 is 50% off until 30th April 2020, including the upgrade. That makes it just $12.50 for first-time users. 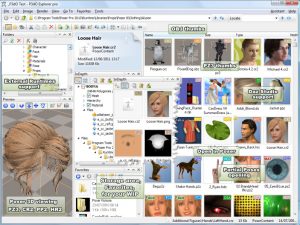 The last P3DO Pro update was December, with many new features added, and this new 2.8 is March/April 2020. Again, lots of new items added and other tweaks, on which the changelog is linked here. Much as I like PzDB as a Poser library manager, this new P3DO 2.8 has to be worth a mere $12.50 just to have as a backup. I believe it also works offline, whereas PzDB needs to ‘phone home’ occasionally, which may make P3DO useful for offline Poser creatives.

Curiously, the DuckDuckGo search-engine seems to heavily censor searches for the software (six results for “P3DO Explorer”, none relevant). Whereas Google Search is happy to provide 14,000 results. I assume that the word “p3do” is now on the Bing bad-words blacklist (DuckDuckGo is mostly Bing, with a bit of Yandex). Yes, it’s 2020 and advanced search-engines are still using clunky old keyword-based censorship. This is yet another reason why DuckDuckGo isn’t something you should use for serious searching, only for quick navigational searches and image searching (on which it’s actually quite good, mostly because it has less spam and fluff than Google Images).

Also, in other discount news, the main Reallusion Store has a coupon code for 50% off everything, also until 30th April 2020. Theoretically that brings the standalone conversion utility 3DXChange 7 Pro down to $99, which will be of interest even if you don’t want to get into the iClone ecosystem.

Carrara 8 is DAZ Studio's official 'big sister' software.
Carrara loads all DAZ and Poser characters and scenes,
and supports LuxRender for top-quality realistic rendering.
« Furry fun
Release: Lightwave 2020 »
Welcome to the planet's only regular blog for the 3D software DAZ Studio and Poser! The design of this blog should adapt perfectly for reading on your iPad, Kindle Fire, digital tablet or smartphone. Enjoy!
Please become my patron on Patreon.