I’m pleased to have bagged MotionArtist 1.3, at some 65% off. It’s Smith Micro’s motion-comics production software with HTML5 output, which was left relatively polished at 1.3 (2016) but which has not been further developed.

It requires Poser 10 or Poser 2014 (not 11) to interface with, for importing Poser’s great range of 3D content. This even enables you to drag and drop a .PZ3 scene into the MotionArtist canvas. Apparently MotionArtist can also import from the older Anime Studio 9 and 10 (not Debut), import layered .PSD files, and vectors(?) though the latter forum-claim is not documented in the manual. And…

“When you update the assets in the creation application, they will automatically update in Motion Artist.”

The trick to getting such a hefty discount on the software is to hang around eBay for the search terms “motionartist” and “motion artist”, waiting for these to reveal a sealed retail DVD copy at a bargain price. There seems to be a couple of sellers with a warehouse stacked high with such DVDs, but they just repeat-list them at crazy-high prices. I guess they looked at the Renderosity page, where it used to be sold for $50, then thought “hrurh, unawailable software, haz sum rarity value… sell fer £70!” I doubt they get many sales. But occasionally a sealed copy pops up at far less than the $40 that Smith Micro currently charge. The software never goes to a discount at the Smith Micro store these days, even on Black Friday.

Anyway, my sealed DVD of v.1.0 arrived and its in-box serial-number was accepted at Smith Micro. The download of the latest free 1.3 update was then 150Mb. The only problem was that the download from Fastspring was extremely slow, and is probably best done overnight. Fastspring live up to their name by offering a nice fast checkout, without need for membership sign-up… but a fast download it is not.

I’m not especially interested in making actual motion-comics with MotionArtist, partly because they can and do induce motion-sickness. But…

* it can produce another kind of toon render from Poser, and even tries to do automated hatch shading on 3D (though not very well);

* it looks like it can do “the Ken Burns effect” (slow pans and zooms) and in HTML5, as an alternative to Slideshow Studio and YouTube. While adding a cool parallax depth-effect too. But can the output for that retain the quality needed for 1920px viewing of vintage photography, while also providing a reasonable final file-size?

* it can do interactivity. Regrettably I don’t think MotionArtist has any basic ‘game logic’ built in, and thus can’t be made into a sophisticated point-and-click 2.5D game with inventory, crafting, fiendish puzzles etc. However the HTML5 export can have clickable hotspots and labels leading to a new scene or frame, which is something. 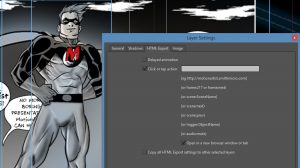 This feature suggests that a small “choose your own story” walking adventure-story could be possible, with careful planning of the loops and arcs. Something along the lines of the simple Zork “you are standing at a crossroads, which of three roads do you choose?” type. Or a Japanese-style ‘visual novel’ where the game element is all in the story-choices. Though there would be no “save game” feature other than browser bookmarking. Still, a bit of third-party javascript on each chapter-start page might do that in a style fitted to the game.

All of which definitely makes it worth the £10, in my view.