Currently on a modest 30% sale at the Blender Marketplace, the third-party Sketch Style add-on for Blender. Basically, it can turn Blender into a sort of basic ‘home-brew SketchUp’ and $16 seems quite reasonable for that functionality. Especially as it’s apparently relatively easy to use…

You basically press a SINGLE button and BAMM! You’re ready to render. All the materials in your objects have just been overridden by the SKETCH STYLE material.

That’s what I like to hear from software. No need to fiddle around with nodes and Freestyle. Though the add-ons styles are rather CAD-ish and limited. Certainly far more limited than if you had SketchUp and undertook a thorough scouring of the Web looking for free Sketch Style presets… 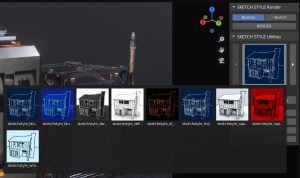 Of course the problem with SketchUp is that it doesn’t play at all nicely with Poser or DAZ, which is why you won’t see any such bridges for that — despite the quite nice sketched-line and ink-wash effects that can be had from 3D in SketchUp. These quick and client-pleasing effects are why the architects use it.

Apparently there may be something like the Sketch Style add-on coming natively in a future Blender but, judging by the demo I’ve seen, it appears to be very early days on that.