Blender 2.90 has now been released, as a final not a beta.

“Intel Embree is now used for ray tracing on the CPU. This significantly improves Cycles performance in scenes with motion blur. Scenes with high geometric complexity also benefit on average.”

So that potentially benefits Poser’s SuperFly, eventually, as SuperFly is a slightly tweaked Cycles under another name. I assume that Poser 12 will plug in the latest Cycles. Though this change may only offer a bit of benefit, as the benchmark improvements are not that great over the previous Blender.

2. Blender users “can use the denoiser interactively in the 3D viewport”, which you couldn’t before.

3. A new filter to auto-smooth jaggies in shadows… 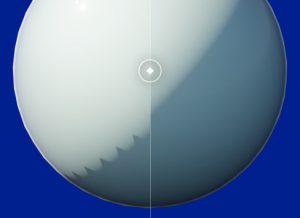 4. Lots of improvements to the sculpting tools, including “four types of cloth simulation.” A plug-in called Extended Sculpt Tools v2.0 has also just been released.

5. Better and more logical/readable layout and nesting style for the zillions of sub-menus and tick-boxes. Also a new Search, for finding commands, menus and buttons in what is still a vast and labyrinthine UI…

“Ever wondered in which menu to find a certain operator? Wonder no more! The new search menu shows you that and more: See the menu and its hotkey; Add the operator to Quick Favorites …”

I think I’d rather have UI ‘skinning’ presets that radically simplify and aggregate/iconize the UI just for particular tasks, but it’s welcome all the same.

6. Grease Pencil improvements. Drag-and-drop to re-order a stack of Grease Pencil modifiers. There’s also what appears to be the ability to turn the edges of 3D geometry into Grease Pencil lineart. At the moment it’s looking very basic, and won’t be challenging Sketchup or Poser any time soon. But’s it’s now in there, and fill-layer improvements are due in 2.91. A quite recent update, 2.83.4, also changed how Freestyle lineart works, so it’s possible that will also be new to you in 2.9.

Overall, Blender is finally “getting there”. I can see myself taking a very in-depth look at Blender 3.0 when it arrives. Especially if it has really nice-looking and easy-to-use NPR by that time, either natively or via the BEER plugin.