Freeware that makes 3D extruded text as a mesh? Back in the day, everyone was doing it. And their chimp, too. Actually I’m fairly sure I once saw Michael Jackson’s pet chimp in a 1980s pop video, and it was coding a ‘3D spinning text’ app on an Amiga 6000. But most such freeware has gone the way of… poor Michael and his chimp.

Poser 11 has a basic “type text, turn it into a 3D mesh” tool, built in, for easy labelling of 3D diagrams, cutaways and suchlike. But the resulting text is a flat mesh and cannot be extruded or “fattened up” into full 3D.

Are you then going to load up DAZ Hexagon or Photoshop, just to do make some fat extruded 3D lettering? Or wrestle with SketchUp (which generally hates OBJs, without a lot more wrestling). Or Blender, which would be like using an atom bomb to swat a fly.

Nope, you’re going to dig up Armin Muller’s kewl bit of Windows freeware that’s dedicated to just this one task. It’s called Elefont 1.4. It’s not pretty, but it still does the job. 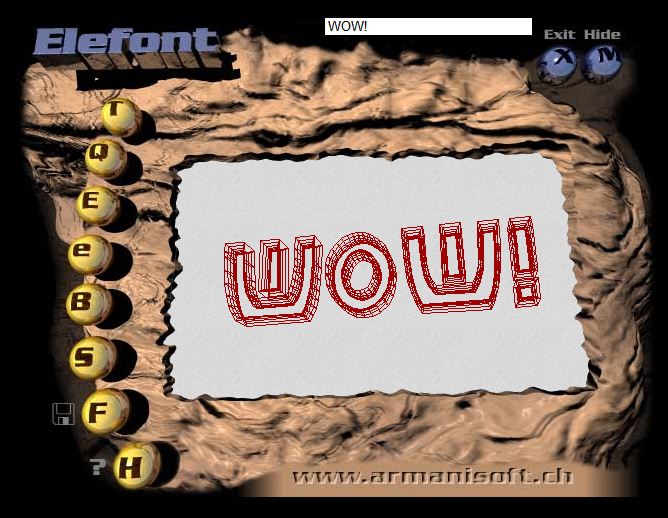 Brycemania still has Elefont 1.4 in its freeware offerings for public download, along with a mfc42.dll some users of older Windows OS’s may need to run it. I ran Elefont fine from Windows 8 without the DLL. Update: the files page is there at October 2021 but these particular .ZIPs are gone. Thankfully Archive.org had saved Elefont 1.4 and also mfc42.zip.

It’s a simple 3D text maker used by Bryce users. You type in text, choose a font from your PC, choose a bevel type from a list of about a dozen, get a real-time preview. 3D text is created and saved out as a mesh. Though sadly it never exported to OBJ. Just to the Bryce .DFX format, and the PovRay/Moray .UDO format. But there is an easy way to get .OBJ in 2020.

Here are the controls, labelled. Q and E are both controlled by mouse, hold + drag, then you get a sort of “invisible slider” and real-time feedback from the mesh on the window as the slider adds more faces or the mesh is extruded out. 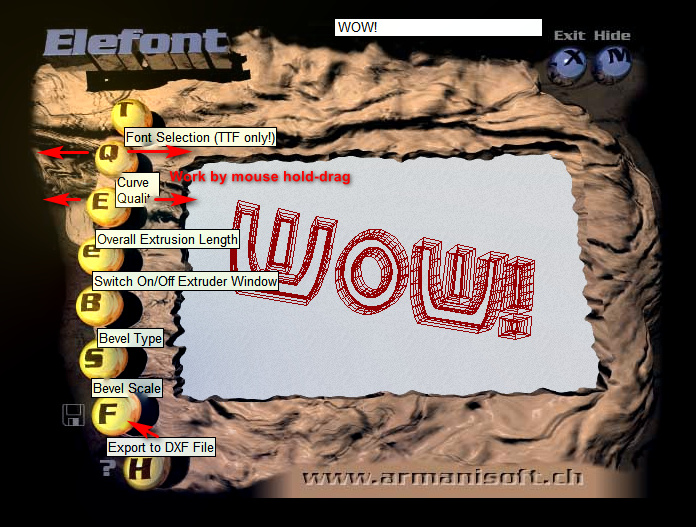 Here you see extrusion in action… 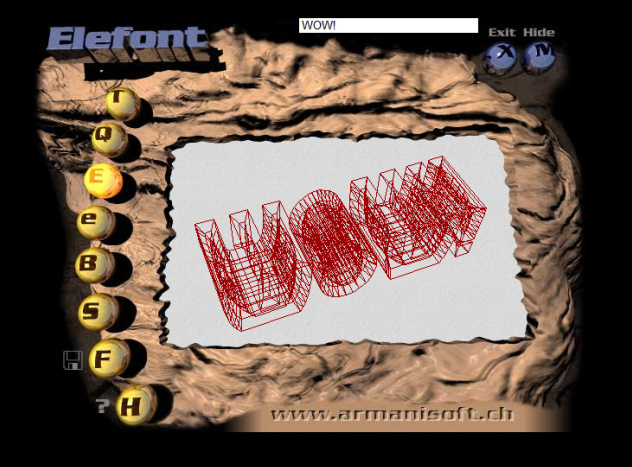 And the basic level of exported mesh…

And the choice of bevel edges… 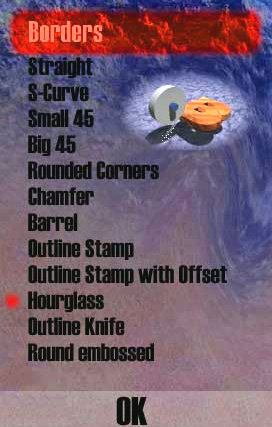 Ok, so you have your .DFX file. Poser 11 can import .DFX directly, but not it seems the ones written by Elefont. Pity.

The current Bryce can still open Elefont’s .DFX fine, although they come in laying on the ground and need to be rotated to face the camera. DAZ’s Carrara can also apparently import them. Both can then export to .OBJ format. The problem there is not everyone has an old copy of Bryce or Carrara installed.

Thus a free conversion utility is needed. Meshlab? No, surprisingly it ‘knows nuuurthing’ about importing .DFX files, though apparently can write them.

The solution is to use the freeware PoseRay utility from the old POV-Ray crowd, who back in the day were working with Bryce and Poser. As such this utility handles both .DFX and .UDO and is very simple to use. Just remember to uncheck “Reorient” before you import the .DFX file. 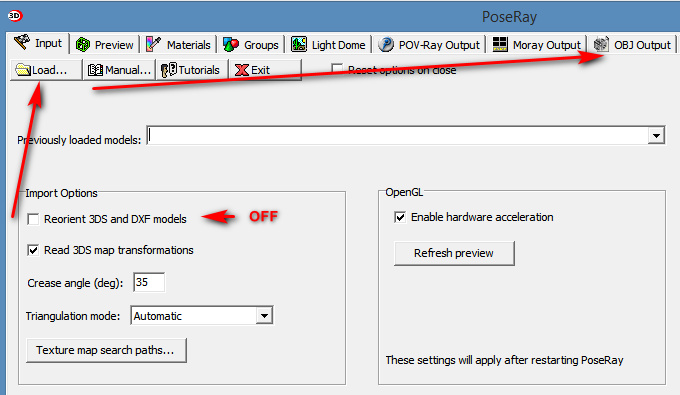 It’s a simple Windows freeware file-conversion utility, and as such doesn’t require you to either have or launch DAZ or Poser.

Your OBJ then outputs with a MTL file. This loads to Poser fine and is correctly oriented on import to Poser and other software. It can then be made to spin. Possibly by a toon chimp.

So the quick workflow is:

4. Export to OBJ. Load to Poser or other software with default settings. Poser will stand the lettering up in the correct way, and I assume DAZ Studio will too.