It’s obviously destined for semi-pro and small-studio videogames makers who want to shave a few days or weeks off a too-tight production schedule. It appears to output very good starting points for your hundreds of NPCs, that will later be optimised in-game for 60 frames per second. However, flip through the latest PC Gamer magazine for a second. Do you see any “uncanny valley” hyper-real characters, that look like the standard AAA humans MetaHuman is pushing? Very few, these days. In fact, the new U.S. edition has a manga/anime girl on the cover. She runs real-time in the latest hit game. 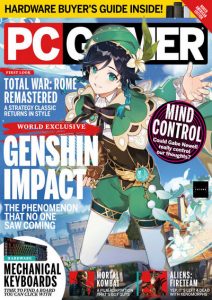 That said, the head-and-shoulders MetaHuman demo shows obvious superiority to previous “quickie avatar/NPC makers” for games, of the sort that now litter the bankruptcy registers. As such there’s also obvious potential for real-time motion-capture movie-making use, if (and it’s a big if) the mo-cap and AI-aided tweaking in postwork can get the footage past the “uncanny valley”. The average screen entertainment viewer wants Marilyn Monroe, not the 2020s equivalent of a Thunderbirds puppet. But 98% of digital art hobbyists have no interest in making storytelling movies, nor in the full-body motion-capture rigs needed to make that happen.

The MetaHuman tech-demo is set to evolve into a free ongoing cloud service, if the early reports are correct. As such I’d say they have two money making options which will dictate their add-ons…

1) make the exporter modules a paid item, if you’re not sending your figure to the Unreal engine. Exporters to push your 12Gb’s of .FBX figure to Blender, Cinema 4D etc, maybe even to DAZ. But, most likely, never directly to their competitors such as Unity, NVIDIA Omniverse etc. Since their build-a-human service is in the cloud, the exporters cannot be pirated. That sounds steadily lucrative, and for not much ongoing effort.

2) or build a vast sprawling content eco-system on this, complete with ‘anatomically-correct’ figures, skimpy frillies, ankle-bracelets etc. Then promise not to look at the ‘megaboobs’ and other naughty figures that people make and download. But that would damage their brand, and also be a big hassle to admin and do PR for. Why bother, when you have the money coming in via option one? For that reason, I can’t see that DAZ or Renderosity will have a great deal to worry about. The ‘silent majority’ of their users will not want to use cloud services, and will be content with clothes-swopping, kit-bashing and morph-tweaking in privacy. Even if it means staying a step below the current state-of-the-art in hyper-realism. Much the same is true of those who want the wealth of creative science-fiction and fantasy content that DAZ and Poser now provide, royalty-free. Not to mention toon, animals and monsters.

It also seems to me that the average dedicated DAZ user will fairly soon just say… “I got a new PC and a 30-series NVIDIA card, so I run DAZ iRay in realtime now”. True, there’s still a damnable graphics-card drought but that surely can’t last forever. This means the “ooh… it works in real-time” thing is a bit of a red-herring. The only caveat there is the hair. Adding 3D hair has always caused a huge drop in scene pliability, and it’s just possible that MetaHuman has done more than create awesome-looking ‘helmet hair’. Real-time hairs that are true ‘stranded grooms’ and which can be easily re-styled… that would be quite something.

Finally, the ‘elephant in the room’ is AI. We’ve recently seen the Deep Nostalgia service very ably auto-animate a still 2D vintage photo with head-turns and eye-blinks. How much further will that go in the next few years? We may yet see Reallusion popping out a ‘CrazyTalk AI’, so don’t count them out yet either.