3DCoat 2021 has been released, with the all-important UI makeover. For those who don’t know it, I guess it could be described as: ‘ZBrush without the mad interface, combined with Substance Painter without the Adobe shackle’. At least one beta tester appears to have been running it successfully with Windows 7, thus it appears not to be ‘Windows 10 only’ software.

It’s also very nice to see a simultaneous release of the new budget-priced version of 2021 just for painting and texturing of 3D, no sculpting. This is called 3DCoatTextura and currently has a nice introductory one-time purchase price of 79 Euros. I think that’s meant to be a Euro symbol… 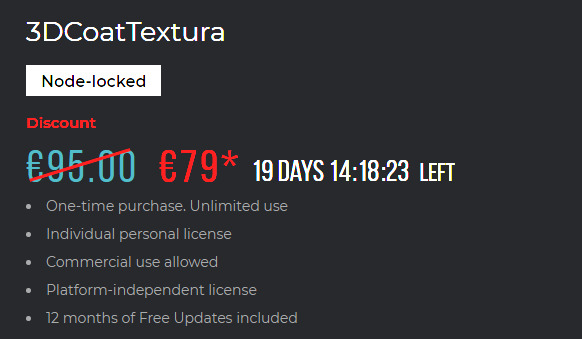 Sadly YouTube knows nothing of something called “3DcoatTextura” and assumes you’ve made a typing mistake, but I’m sure there must already be previews and even tutorials on the software out there.

The other one-time purchase alternative would be the new Marmoset Toolbag 4, but that’s $300 and so rather out of the range of most hobbyists. Marmoset 4 also took an absolute age to load a test scene, was less than stable in my testing, had a very unlikable UI and then fell at the first hurdle — simple framing of a figure with the viewport camera… how? Where the heck are the camera controls? I gave up. Uninstalled.

« WordPress theme-wrangling done
How to run Python scripts in Blender »