You now have to smuggle some types of gaming PCs into some U.S. states. The PC makers such as Dell can’t ship there…

“This product cannot be shipped to the states of California, Colorado, Hawaii, Oregon, Vermont or Washington due to power consumption regulations adopted by those states. Any orders placed that are bound for those states will be canceled.”

Even a really rather basic one from Dell, that is little more than a standard £800/$1100 desktop… 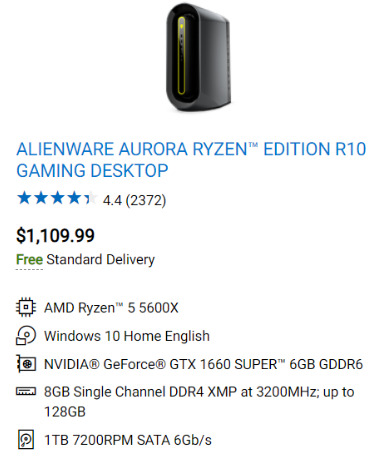 Presumably any kind of slightly-powerful graphics production workstations must also be effectively banned in those places? Hollywood, which last time I heard was in California, may be rather annoyed at this… though not quite yet. Because a little research shows the legal problems will only start for non-gaming high-end PCs from 9th December 2021. Time to follow Elon, Hollywood… and move to Texas?

One wonders if the politicians who passed these laws have electric cars standing next to their heated swimming-pools, and how much energy those need.

Anyway, it’s often rather pointless trying to regulate such fast-moving technology. It just shifts things sideways. The politicians have probably never even heard of eGPUs.