Digital comics makers who draw or paint over their DAZ Studio or Poser renders for might be interested in a free webinar from Smith Micro on “What’s New in Manga Studio 5?”. Despite its somewhat misleading name, the specialist graphics software Manga Studio 5 is not just for manga artists. It’s just about the best dedicated comic-book production software available. MS5 also has the industry’s best range of pressure-sensitive digital “black ink” brushes. 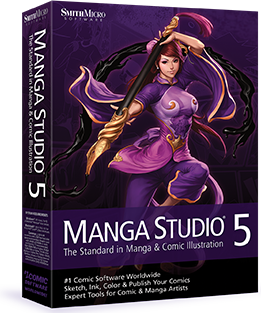 The free one hour webinar is on 5th February 2013, at 3pm in the afternoon (US Pacific time). It’ll be presented by Doug Hills, comic book artist and author of the training book Manga Studio For Dummies

“Doug will explore the new, fully-customizable interface and show you how it can help to improve your workflow. He will also review the stunning new coloring and painting tools, demonstrate how it is even easier to import and use 3D character and background images, create word balloons, and much more. We will conclude the hour with a brief Q&A session where you will be able to ask questions and have them answered.”

The pro “Ex” version of Manga Studio is set for a summer 2013 release.

Carrara 8 is DAZ Studio's official 'big sister' software.
Carrara loads all DAZ and Poser characters and scenes,
and supports LuxRender for top-quality realistic rendering.
« Win the whole Stonemason collection!
Nautilus – modular steampunk interior »
Welcome to the planet's only regular blog for the 3D software DAZ Studio and Poser! The design of this blog should adapt perfectly for reading on your iPad, Kindle Fire, digital tablet or smartphone. Enjoy!
Please become my patron on Patreon.