Are you a DAZ Carrara user, but jealous of the DAZ Studio and Poser plugins for the free advanced LuxRender 3D renderer? Well, now there’s a new Luxrender plugin for Carrara! It’s called Luxus for Carrara and has just been released, at an introductory price of 30% off. There are 32-bit and 64-bit versions, and it works on Windows or Mac. 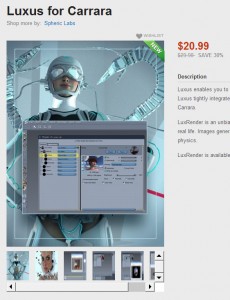 Freebies and an extra manual for Carrara Luxus can be had over at the Carrara Cafe website.

Carrara 8 is DAZ Studio's official 'big sister' software.
Carrara loads all DAZ and Poser characters and scenes,
and supports LuxRender for top-quality realistic rendering.
« Goth boys: Daz and Poser content survey
Get dressed with Sergio – Poser clothing creation masterclass »
Welcome to the planet's only regular blog for the 3D software DAZ Studio and Poser! The design of this blog should adapt perfectly for reading on your iPad, Kindle Fire, digital tablet or smartphone. Enjoy!
Please become my patron on Patreon.