Following my recent tutorial on “how to make a simple sphere glow in Carrara 8”, I’ve found that there’s also a way to have a light glow, rather than have geometry glow. Doing it this way takes whole lot less render time than my earlier technique, but the effect seems less convincing unless you want a standard “car headlight” effect. So it seems useful for middle and far-distance lights, especially in instances where you have some geometry objects intersecting the light — objects that would complicate any Photoshop postwork using a gradient glow filter.

1. First, drop a bulb light onto the stage… 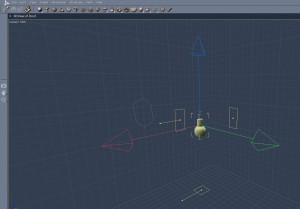 2. Click on the “General” tab in Carrara’s Assemble room. Boost your “Brightness” slider way up, maybe between 170% to 200%. Change the bulb’s colour to the colour you need. Run the “Range Falloff” slider up to 100%. Make sure that “Cast Shadows” is turned on. 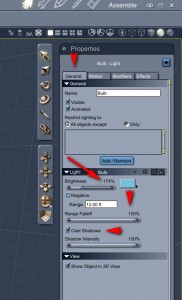 3. Now switch to the adjacent “Effects” tab. There, tick “Light Sphere”, then click the edit button next to it. 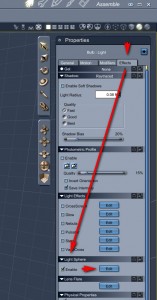 4. Clicking in the “Edit” box will pop-up a window containing all the “Light Sphere” effects. Here, turn on “Full Rendering” and “Auto Update”, so you can preview the glow effect in real-time. Then increase “Intensity” to 100%, “Radius” to about 500, and “Quality” to perhaps 60%.

5. Here’s the final PNG render of the glowing bulb light, with the above settings… 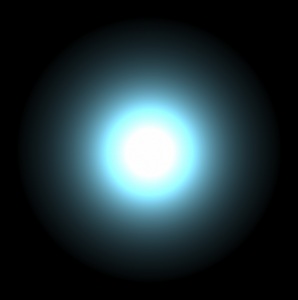 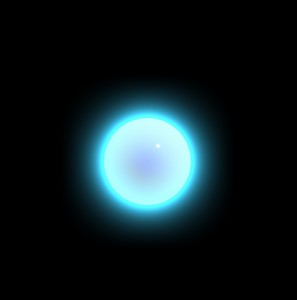 So, my conclusions from my Carrara glow experiments (so far) is:

* glowing bulb lights are vastly faster to render, and also more suitable for use as middle and far-distance lights in a scene.

* glowing textured geometry is likely to give far better and more subtle effects, and would be a good choice for props and characters that are close to the camera. Although choosing this way to make things glow is likely to significantly increase render time.

(As before, note that Google Chrome’s graphics rendering-engine can’t handle the subtle graduations of the light spillover, and will dither/”band” the glow effect thus making the renders look rather ugly)

Carrara 8 is DAZ Studio's official 'big sister' software.
Carrara loads all DAZ and Poser characters and scenes,
and supports LuxRender for top-quality realistic rendering.
« 50% off the whole Stonemason store
Heads up! »
Welcome to the planet's only regular blog for the 3D software DAZ Studio and Poser! The design of this blog should adapt perfectly for reading on your iPad, Kindle Fire, digital tablet or smartphone. Enjoy!
Please become my patron on Patreon.