Love this picture from the Exidium Corp., which perhaps points the way toward combining sci-fi art with wildlife art.

My recent survey of DAZ and Poser content for ‘alien wildlife and fauna’ suggests there’s a big gap in the market for this sort of creature content in 3D. How many would buy it is another matter — but Dinoraul’s excellent dinosaurs, perhaps the closest 3D content, seem to sell well and to command high prices.

I believe the videogame Planet Explorers tries to do something similar to this sort of ‘alien safari’ theme, though with not-so-lush graphics (I think it’s an MMO, hence the need for the circa 2004 low-poly style?). But the animal designs in it are pretty inventive… 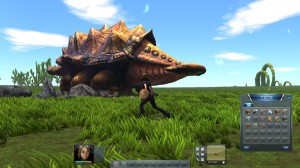 Carrara 8 is DAZ Studio's official 'big sister' software.
Carrara loads all DAZ and Poser characters and scenes,
and supports LuxRender for top-quality realistic rendering.
« New Sketchbooky blog for Sketchbook Pro users
Daz and Poser, new content for May 2014 »
Welcome to the planet's only regular blog for the 3D software DAZ Studio and Poser! The design of this blog should adapt perfectly for reading on your iPad, Kindle Fire, digital tablet or smartphone. Enjoy!
Please become my patron on Patreon.