“Reallusion has acquired a special license from Glare to use the Indigo [IndigoRT] renderer in our AP. IndigoRT for iClone has the exact same features of Indigo RT, the only difference being that it’s dedicated for iClone rendering and won’t support Max, Maya, or SketchUp.”

I can’t yet find any side-by-side comparisons of the iClone5 renderer and iClone6 + IndigoRT. But here’s brand468’s 50-second render of an old low-poly scooter, exported from iClone to SketchUp and 2000px test rendered with IndigoRT… 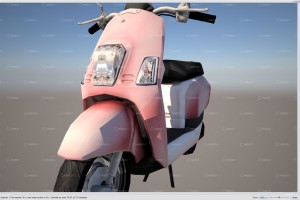 So… useful for stills, perhaps, if you can spare 2 minutes per render to get all the grain off the image. Which is not bad. It would be a nice option for stills artists to have, depending on how nice the lighting model is and if IndigoRT supports glows and suchlike.

One thought on “iClone6 and IndigoRT”