The newest Daz Studio Pro 4.7 is out now. 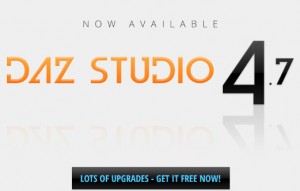 There seem to be some quite interesting and possibly important new features, which include among others…

* Interactive Progressive Rendering (IPR)… “see near real-time camera, light and material modifications”. Even moderately accurate WYSIWYG previews of the final render lighting would be a 1000% improvement on the old versions.

* “Back to Base”… an easy way to safely strip out all the modifications you made to a base character/figure.

* Render Engine Update… “3Delight render engine to 11.0.105”. But this just seems to be a bugfix advance. The last important speed change was back in August with 11.0.101, which added… “Ray-traced subsurface scattering now uses much less memory and is 5% to 7% faster”.

Still free (for now), and still including…

Though those installing for the first time will find the above extras are separate downloads. 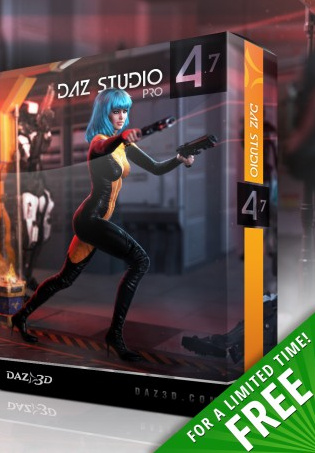 « Raytraced rooms
New Nursoda character: Merpal »
Welcome to the planet's only regular blog for the 3D software DAZ Studio and Poser! The design of this blog should adapt perfectly for reading on your iPad, Kindle Fire, digital tablet or smartphone. Enjoy!
Please become my patron on Patreon.