The Syfy Channel is known for its often-unimpressive low budget SF productions, with painfully cheap and sparse CG. But it’s interesting to hear that they’ll be dramatising Arthur C. Clarke’s intelligent and sweeping debut novel Childhood’s End as a serial.

“Childhood’s End will be adapted by Matthew Graham (creator of BBC’s Life on Mars and Ashes to Ashes).” 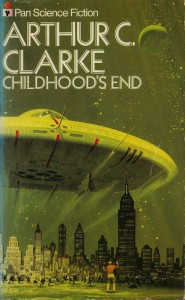 Update: I’ve now seen it. A very excellent 5.5 hour adaptation, and definitely a success. It was slow in the middle, partly because it was padded with about 40 minutes worth of “emotional couples talking about their emotions”, presumably added to widen the audience appeal. At least 50 minutes could easily have been cut, giving a big boost to the narrative energy. Hopefully we’ll see a tighter fan-edit at some point. They didn’t mess with the ending either. Overall, a very fine adaptation.