Available now is the new flagship female DAZ character Victoria 7 for Genesis 3, which only works with the DAZ Studio 4.8 beta.

Some readers may be wondering: “What?! I only have Genesis 2, where do I get Genesis 3?” Good question — none of the Victoria 7 DAZ Store pages have any indication of how you get Genesis 3. The latest version of DAZ Studio states clearly that it only ships with Genesis 2. DAZ’s main Genesis 3 information page has no links to any G3 downloads or product.

So the process of getting G3 seems a real mystery. It took me 40 minutes of searching until I found the following aside, buried in a Forum thread:

“You can select it [the new G3 Female icon] in your Library [inside of DAZ Studio 4.8 beta only] then click the Download & Install button”

This apparently starts your “G3 Female Starter Essentials” download and install, through Download Manager. There’s currently no other way, such as .zip, to get it.

Then once you have G3 up and running, you can then load your new Victoria 7. You can also now get three G3 Female expansions… 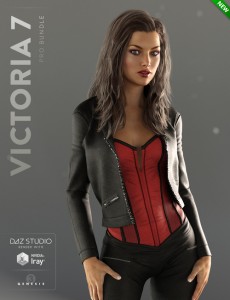 Carrara 8 is DAZ Studio's official 'big sister' software.
Carrara loads all DAZ and Poser characters and scenes,
and supports LuxRender for top-quality realistic rendering.
« Hyperloop pod design
Just add 3D »
Welcome to the planet's only regular blog for the 3D software DAZ Studio and Poser! The design of this blog should adapt perfectly for reading on your iPad, Kindle Fire, digital tablet or smartphone. Enjoy!
Please become my patron on Patreon.