I’d almost forgotten that Vue XStream 2015 added a new NPR (Non-Photorealistic Rendering, or ‘toon and paint’ to the rest of us) module, when it shipped last spring. I took a quick look at what people have been saying about it, and doing with it over the last nine months. 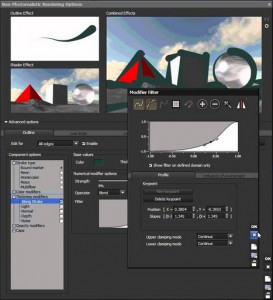 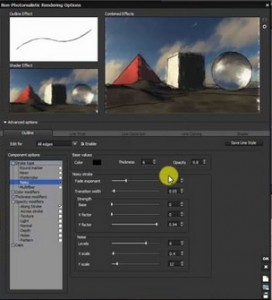 Unfortunately there seems to have been very little interest in this feature. Judging by the half-dozen 2015 NPR renders shown online, there was even less use of the feature. Just a few tests.

Here are the better ‘not-too-Photoshoppy’ demo pictures made with Vue 2015’s NPR: Vue’s own planes’ promotional picture; some trees by CG-Garlic; and (with some Photoshop) Dave de Kerf’s “Trench Run”. 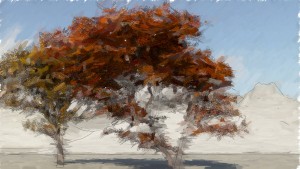 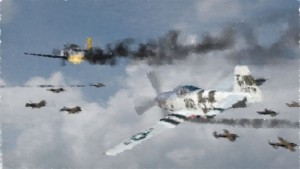 This again confirms my general theory that the mass of 3D users only really want “photoreal, photoREAL, PHOTOREAL!”. Though we may may occasionally go “oooh!” at an NPR picture for five seconds, before going back to using the magnifying glass to get each of Genesis 2 Female’s individual SSS skin pores looking just right.

But I also have a theory that the professional artists — those who can massage these sorts of NPR effects up to the level where most paying clients can’t really tell if they’re 3D or 2D — they just don’t want to say anything about it or show it off in public. Because they’re making money off it. Mostly that’s just my educated guess, but I have heard various people say things along those lines. Did you know, for instance, that the artist Dave Gibbons extensively used Poser to make one of the all-time-great graphic novels, Alan Moore’s Watchmen? Yup, Poser. And I bet most readers can’t get a third of the way through a copy of ImagineFX, without muttering: “they must have used Poser or DAZ for the basis of that one…”.

Anyway, here’s everything I could find on Vue 2015’s NPR. There’s not much. Nothing official from Vue on YouTube, which is kind of amazing. But Vladimir Chopine of Russia has a good solid 35-minute tour of the NPR module for free on YouTube, part of his longer paid-for GeeksAtPlay video introduction to using Vue 2015. The NPR module looks very powerful and flexible, able to combine and merge multiple lines and effects. If this was a Photoshop plugin for sketching and painting over imported 3D models in Photoshop, there would be a mini-industry built around it by now…

GeeksAtPlay’s video tutorial continues in Part 2, Part 3 and Part 4, to get the full 35 minutes.

“Vue contains a new, extraordinary NPR (non-photorealistic render) engine, which is simply awesome. There are several NPR engines in different applications, but e-on did something truly revolutionary and created a free and customisable tool for artistic abstraction. Here you can determine the full artistic style of the rendered image. This is a valuable addition because you have the opportunity to combine, for example, the brush weights with the colours of the pictures and other manipulators. […] For backgrounds in animation and feature films this could bring a strong uniqueness. Unfortunately, NPR engine only currently supports Vue xStream module.”

For artists to read that about a major 3D software in a major magazine review, and then give a collective shrug of the shoulders to it… it seems a bit sad.

Carrara 8 is DAZ Studio's official 'big sister' software.
Carrara loads all DAZ and Poser characters and scenes,
and supports LuxRender for top-quality realistic rendering.
« 1971s sale
Free online: 2hr Poser comics webinar »
Welcome to the planet's only regular blog for the 3D software DAZ Studio and Poser! The design of this blog should adapt perfectly for reading on your iPad, Kindle Fire, digital tablet or smartphone. Enjoy!
Please become my patron on Patreon.