So what is a “curvature pass” in Keyshot? Non-existent, that’s what it is. There is no such render type, as I found after I wasted half an hour trying to discover it. So I’m just dropping this blog post here to save others a similar waste-of-time. This is now the second time in recent weeks that a spurious mention in 3D Artist magazine has led me on a ‘wild goose chase’… 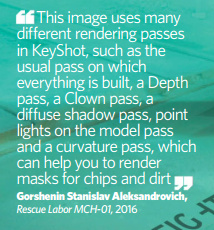 There is no such render pass in Keyshot…

1. Save a version of your final render-ready Keyshot file that you can afford to destroy.

2. On the model, find all the textures that you want to distress in Photoshop. Double-click on them and turn them to Texture map: Texture: ‘Curvature’. Make sure you have a suitable bump map in place for each texture.

3. Set up bright colours on the Negative | Zero | Positive colour-pick boxes for ‘Curvature’.

Now render, and you get a custom render pass that is of some use in Photoshop, using Color Range selection… 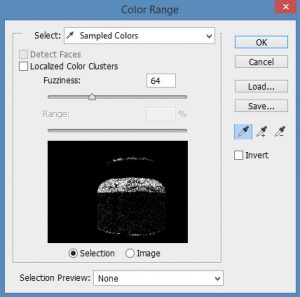 Here’s a quick test, without using any extra ‘rust render’:

From left to right: 1. A test inkpot with a sort-of rough-texture gold surface. 2. Test inkpot with a distressed texture applied, then switched to ‘Curvature’ with strongly alternating colours and rendered. Colour selected with the eye-dropper in Photoshop, and used to select only a section of the scratched art-texture. 4. Selection “paste in place” and blended with the main render, for a very nice distressed patina look. It also serves to mute the shinyness of the main render.

Neither the gold texture or the super-crackle surface would have been suitable on their own, but this method allows one to get a more subtle blend, with local rim-distress such as around the rim and base of the inkwell.

I could be wrong, but that seems to be what is meant by the mythical “curvature pass”.

Carrara 8 is DAZ Studio's official 'big sister' software.
Carrara loads all DAZ and Poser characters and scenes,
and supports LuxRender for top-quality realistic rendering.
« Vue 2016 available
Ugee + Xbox controller + JoytoKey »
Welcome to the planet's only regular blog for the 3D software DAZ Studio and Poser! The design of this blog should adapt perfectly for reading on your iPad, Kindle Fire, digital tablet or smartphone. Enjoy!
Please become my patron on Patreon.