The DAZ and Poser stores:

* The DAZ Store has a 30% off page. Some of the content creators also have heavy discounts. Nothing in my WishList is discounted though.

* Renderosity. No sign of any Black Friday content sale yet, though the Poser 11 software is discounted (see below).

* Hivewire 3D. No sign of any Black Friday sale yet.

* Cornucopia 3D (for Vue users). A nice range of What’s On Sale? items, but no specific Black Friday discounts yet.

* Runtime DNA has 60% off all content remaining in the store. Hmmm… login. Wishlist is still working? Oh yes, though it’s rather depleted these days. I see that a number of Crossdresser licenses are still available and discounted, including Cookie. Advanced Shaders Launcher script for Poser, get the complete set for $7. So I loaded up on various items at RuntimeDNA.

Then I unloaded — because for some really annoying reason, the RuntimeDNA site no longer accepts PayPal payments wholly in dollars. If you’re in the UK you now have to pay partly in dollars and partly in pounds, which makes the purchase a lot more expensive for someone who holds and wants to pay in U.S. dollars only. I took several items out of my cart, so as to reduce my exposure to the rip-off rates. 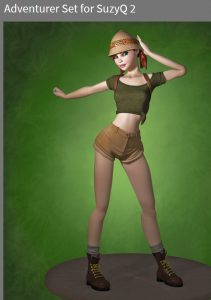 For those who have the semi-toon character SuzyQ 2 in their Runtime I spotted the above outfit at Runtime DNA, for just $3.80 (and with Crossdresser 4 it should convert for the original Star).

The Poser content manager database PzDB 1.3 is down from $52 to $36. Still one of the best ways to wrangle a vast runtime.

Vue? Autodesk Sketchbook? No sign of any movement from them yet.

Manga Studio Pro for $25? Yup. Although these days they call it Clip Studio Pro…

Microsoft’s Surface Pro 4 128GB + keyboard and pen, is available in the UK for £599.99 from the Microsoft Store UK, a hefty £259 discount. They’re clearing them out before the Surface 5 arrives in the New Year.

Lots of graphics cards and other deals in the UK, at Overclockers.

Carrara 8 is DAZ Studio's official 'big sister' software.
Carrara loads all DAZ and Poser characters and scenes,
and supports LuxRender for top-quality realistic rendering.
« CrazyTalk Animator 3
Update on the Black Friday sales for DAZ and Poser: »
Welcome to the planet's only regular blog for the 3D software DAZ Studio and Poser! The design of this blog should adapt perfectly for reading on your iPad, Kindle Fire, digital tablet or smartphone. Enjoy!
Please become my patron on Patreon.