There’s an interesting new thing from Adobe, aimed at beefing up Photoshop’s presently mediocre 3D capabilities. Adobe is doing a simple for-dummies version of Keyshot, called ‘Project Felix’. It aims to make 3D more accessible for 2D artists to use in 2D pictures. Without having to learn the equivalent of the control interface of a nuclear submarine, as is the case with software such as Blender and many others.

Project Felix is still in “coming soon” mode, with a public beta set for “later in 2016” before eventually shipping with Adobe Creative Cloud sometime in 2017. It looks like it’s aimed at people who are so limited that they couldn’t even handle a half-day basic training session on Keyshot, which is just about the simplest 3D software to use. 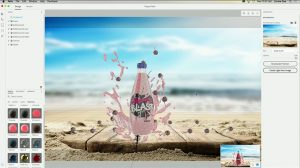 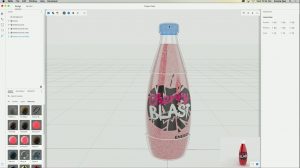 Basically it seems to be Keyshot, plus the ability to seamlessly take the render into Photoshop as a layer. The V-ray render doesn’t look very impressive in the video, but it does look fast — so either it’s on an ultra-fast setting, or Adobe have added some special sauce to V-ray, or they’re expecting users to have a couple of ninja graphics cards available.

I wonder if the Keyshot guys will react to this move by Adobe, re: their pricing, ability to interface seamlessly with Photoshop, and maybe even a V-ray hookup? Their $1,000+ pricing, at least, will likely come down.

The other interesting thing will be to see if Adobe will support the transparency alphas in .FBX and .OBJ models exported from DAZ Studio and Poser? Will such exports have blocky square leaves and white ‘slab’ eyelashes, because Felix can’t juggle the transparency mapping correctly?

Carrara 8 is DAZ Studio's official 'big sister' software.
Carrara loads all DAZ and Poser characters and scenes,
and supports LuxRender for top-quality realistic rendering.
« What’s new in iClone 7?
MS Paint 3D »
Welcome to the planet's only regular blog for the 3D software DAZ Studio and Poser! The design of this blog should adapt perfectly for reading on your iPad, Kindle Fire, digital tablet or smartphone. Enjoy!
Please become my patron on Patreon.