“Ah… what I could do with a faster PC”. How many times have you heard that one? Well, if that’s you then you might interested that there’s a new form of slot-in cache memory from Intel, “Optane memory”. It promises to give Moore’s Law another push and potentially to make media content production work on PCs faster. If you have a Core i3 CPU or higher… 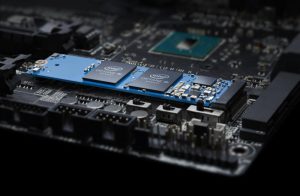 Intel-based PCs with Optane memory ready-fitted should be shipping-and-affordable around Christmas 2017. But bear in mind that Intel’s cheapest 8-core consumer CPU costs $1,000 just for the chip. So a complete 8-core + Optane system is not likely to be cheap.

Note, however, that Intel are mostly touting start-up times for software, and I’m guessing that the “overall system performance will be faster by up to 28%” may be degraded by other components. But if you already have the correct motherboard slots and the correct CPU, then a mere $44 for 16GB of Optane memory looks like it may offer a very affordable speed boost for artists, even if it’s only an overall system performance boost of perhaps 15% in the end.

The Optane price also compares well with the current price of around £69 (UK) to get, say, an extra 8Gb of branded DDR3-SDRAM 1600 for my AMD-based PC. But that may may not show a great deal of difference in performance either…

“… for most regular work, there is no tangible performance difference between 8GB and 16GB of system memory.”

“test only pushed the entire system usage to 6.1GB”

Carrara 8 is DAZ Studio's official 'big sister' software.
Carrara loads all DAZ and Poser characters and scenes,
and supports LuxRender for top-quality realistic rendering.
« A few Vue freebies
Some choice Vue freebies at Cornucopia »
Welcome to the planet's only regular blog for the 3D software DAZ Studio and Poser! The design of this blog should adapt perfectly for reading on your iPad, Kindle Fire, digital tablet or smartphone. Enjoy!
Please become my patron on Patreon.