You don’t need a wizard to conjure up some halflings from Middle-Earth, just a copy of the free DAZ Studio and some content packs. Here’s my survey of the suitable content for making fan-art. 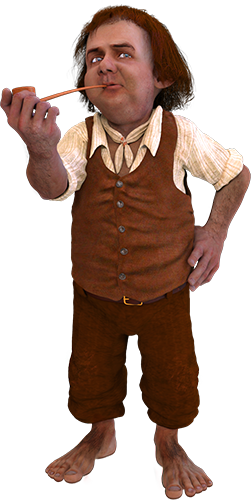 The following may contain spoilers, for the early chapters of the book, for those who’ve not yet read it.

The good thing about the following being Genesis 2 is that G2 can be easily imported to Poser, and can thus get Poser 11’s Comic Book Mode treatment. 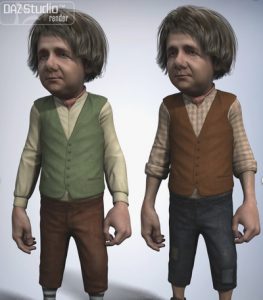 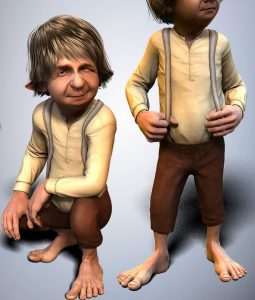 Dwarf Poses for Genesis 2 Male including pipeweed smoking and walking-with-a-staff poses. This includes a matching pipe and walking staff as props. 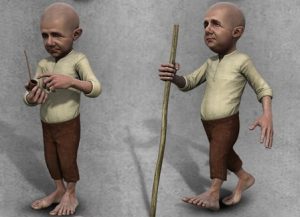 The above packs may use the name ‘dwarf’ on the store, to avoid the wrath of the Tolkien estate (‘halfling’ and ‘middle earth’ are fine, as they were in use pre-Tolkien). But in terms of body shape and feet, it’s really the only DAZ / Poser halfling worth having.

There is however, and also for Genesis 2, the rather neglected Ferdibrand Goodchild for Genesis 2 Male character. Perhaps suitable as a Woody End inn-keeper, but he would need adapting to look far more rustic and Shire-like and less Byzantine. I’ve been unable to discover any ‘rustic Ferdibrand’ materials makeover packs, or any other add-ons. He might also provide the foundation for making a large rural halfling of the Farmer Maggot type. 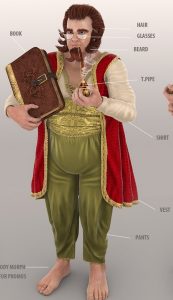 Most of the Dwarf Creator promo faces don’t look right to me, as they’re too pixie-like and pinched. Halflings eat well in the Shire, what with ‘second breakfasts’ and all, and their faces should generally be far rounder and more cheery. Dwarf Creator for Genesis 2 Male does have some face morphs, but to get a movie-quality halfling face you might also want to have Genesis 2 Male Head Morphs installed.

Wyatt Hair for Genesis 2 Male, for which you probably want to play with adding extra curls. 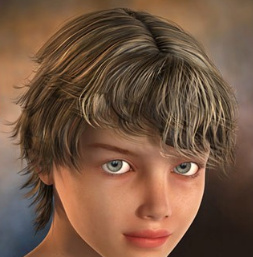 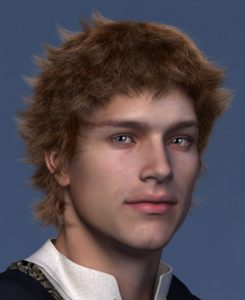 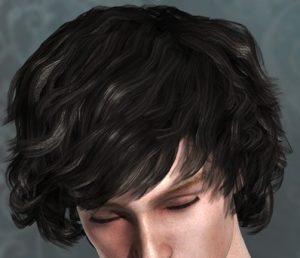 Also see Gurumarra for Genesis 2 Male, for the hair.

Real Hairy for Genesis 2 Male has foot hair as polygons. It’s applied in a modular manner and there are hair modules for… “knuckles and toes. Each module has its own morphs for length, thickness, clumping, wetness as well as color and glossiness options.” However, even that might not do it, as I get the impression that some of the most robust halflings have something akin to curly “woolly” sheep-like hair on their feet. Some post-work painting of hair, using Photoshop, may still be needed for certain types of halfling. 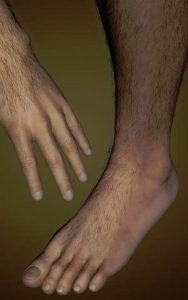 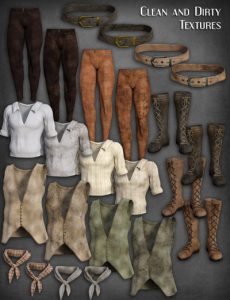 Steampunk Working Class for G2M, for a good plain base of Sam-like gardening shirt and trousers on which you could build an outfit. 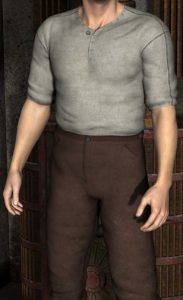 You’ll probably want to avoid the Meshbox Halfling Village (versions 1.0 and 2.0 alike) series, as they are too old and low-poly now, and use a single texture map so can’t be easily re-textured. 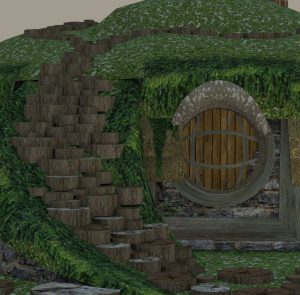 Mortem Vetus has a rustic pipe and bedroll, both freebies for Poser. 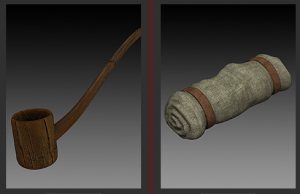 Classic Pipe Collection has a long-stem pipe suitable for the best Longbottom Leaf. 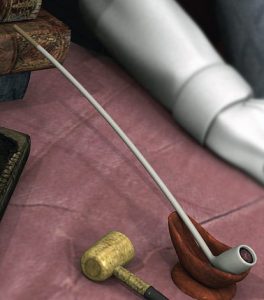 The Party Tree might be Giant Tree DR from quality maker Dinoraul, and Ancient Tree by DarioFish would also be a good choice. 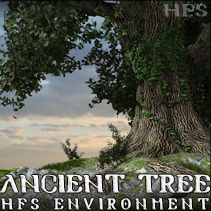 There’s an old Doors pack for Poser that has a ‘Hobbit Hole.cr2’ in it, and a hinged door which opens. It’s old, so needs re-texuring, but you may find it your runtime if you have a decade-old collection. It looks like a good starting base for quality hi-res retexturing.

Walking over The Shire, to the Woody End:

Vue’s Walk in the Forest is a fairly good approximation of the ‘neglected cart road’ which takes the back way from Hobbiton to the Woody End. Note that for this to work properly you need to have installed Large European Ash-Summer sparse foliage / Broad Leaf Straight Trunk / Alder-Late Summer / and Long Grass, all shipping in the Vue Infinite/xStream default free-content pack. 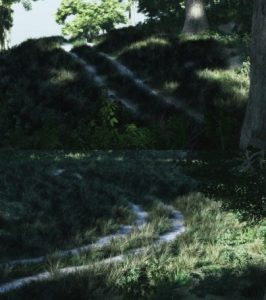 Poseable Trees with Ivy is less realistic and more storybook. It’s a bit bare in terms of ground cover and thus would need either a good low-poly ground-cover pack, or lot of grass and low herbs ‘Photoshopped in’ at the postwork stage. 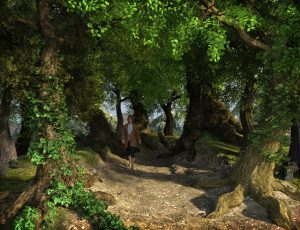 Campfire and Cooking Set. Also Campfire which is self-illuminating and casts light, in Poser.

Survivors Backpack by Cybertenko for M4 would need modification of its modern textures, but it looks fairly useful as ‘Sam’s big pack’ if you can convert it for G2M. 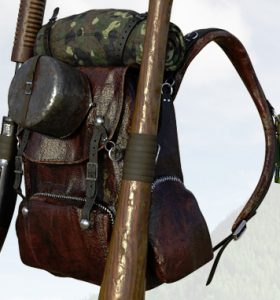 Luthbel’s Dragonworld: Wildenlander for V3 also has a softer and less-square backpack prop to fit V3, and it also has a water-bag. 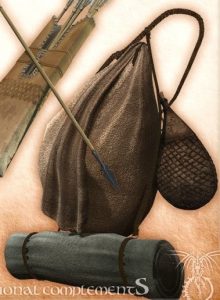 Oskarsson’s HellHorse and Dynamic Wraith for V4, both for Poser. For the horse, note that the… “Materials will not work in Daz Studio” and I can’t quickly find any free DAZ MATs for it. 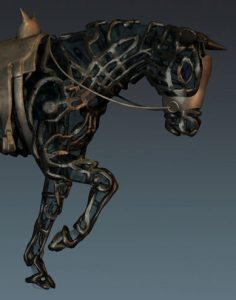 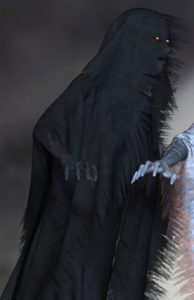 Also look at Soul Nexus for the original Millennium Horse.

Robed aged wizards with big pointy/floppy hats are, of course, very common and they really deserve their own content survey. Storybook dwarves, likewise.

Lastly, as an alternative to the Dwarf Creator for G2M, Nursoda’s Gosha could also be looked at if you want a crowd of background halflings, since you might want a less memory-intensive base character for that than G2.

Carrara 8 is DAZ Studio's official 'big sister' software.
Carrara loads all DAZ and Poser characters and scenes,
and supports LuxRender for top-quality realistic rendering.
« Big spring Clearance sale at Renderosity
Poser and DAZ content: what’s new in April 2017 »
Welcome to the planet's only regular blog for the 3D software DAZ Studio and Poser! The design of this blog should adapt perfectly for reading on your iPad, Kindle Fire, digital tablet or smartphone. Enjoy!
Please become my patron on Patreon.