When I first loaded up Poser 11 Pro I fairly quickly discovered that the old Sketch Designer is happy to noodle its sketch-render magic along the new Comic Book mode’s toon lines, and thus create a simple soft-charcoal line, for later Photoshop blending into the hard-ink Comic Book toon lines.

I more or less stopped there, happy to have a sort of ‘grease pencil’ line. But after some more experiments today I’ve discovered it’s possible to use Poser’s Sketch Designer to create a different type of ‘rough sketch’ Comic Book line, and at the same time to render Sketch Designer’s lines into the base materials too.

Here’s the stock Andy 3D character in a flat light, with a simple slightly-shaded plain texture and with the normal Comic Book mode inking lines applied. Next to him is the Andy with some of my home-brew Sketch presets applied into the Comic Book lines, plus another preset where I was trying to get big chunky ink lines. 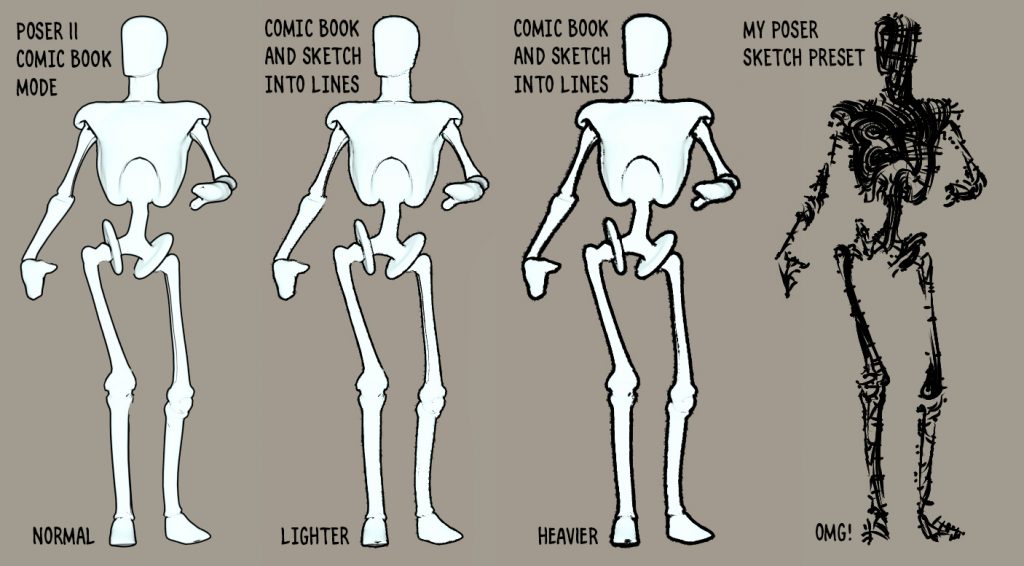 I’ve also discovered (or perhaps re-discovered, after many years?) that you can preview and design a new Sketch render preset in 4000px. First turn off all the Sketch Designer’s also-sketch-lines-into-the-background panel sliders (which speeds it up enormously) and do any old Sketch render to that size, then leave the finished render ‘live’ while going back to: Render | Render Settings | Sketch Designer. This time the Sketch Designer will take some seconds longer to load. That’s because it’s now picking up the settings from the finished render and offering you a live preview at a huge 4000px. As such you’ll have to pan wildly across the preview, to get your object back into view again. But you can then design Sketch presets which work for a 4000px render… 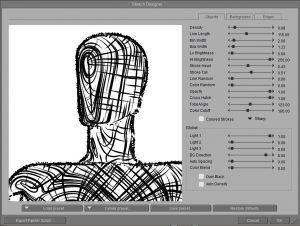 Sadly it seems to be no way that convincing traditional cross-hatch ink shading can be done this way, except perhaps as a very lucky accident for one-off character portraits. By ‘convincing’ I mean I need it to work like a human inker would — follow and hug into the shadows, follow curved surfaces with a suitable angle-of-attack, and not start whorling and swirling about. Update: it can be done, but needs tight control of other variables.

Still, while the Sketch Designer has its limitations in terms of realistic cross-hatching , it’s also fairly easy to take it far away from its usual ‘teeny-weeny hairlines’ default presets…

For reference, if you want to share any Sketch Designer presets you’ve made, your personal ones get stored as .pzs files in one of Poser 11’s many obscure hidey-holes, at:

Carrara 8 is DAZ Studio's official 'big sister' software.
Carrara loads all DAZ and Poser characters and scenes,
and supports LuxRender for top-quality realistic rendering.
« CrazyTalk Animator 3.1
Rust-Icator for Poser, working in Poser 11 »
Welcome to the planet's only regular blog for the 3D software DAZ Studio and Poser! The design of this blog should adapt perfectly for reading on your iPad, Kindle Fire, digital tablet or smartphone. Enjoy!
Please become my patron on Patreon.