Natural landscapes survey for Poser and DAZ, Part One — terrains and plants:

Spring is here, and perhaps you want to have Poser render a beautiful wild garden? But is it possible for Poser to compete with Vue? No, it’s not. Although some content artists have had a jolly good try at providing Poser users and Daz users with the means to try it (for DS3: Mood Master 2 / Light Dome Pro 2 / etc). What follows is a quick survey of key basic landscape resources in this area.

The Runtime DNA store seems to have cornered the market on naturals for Poser. They have three main series…

Series 1: Microcosm. These are terrains and the texture sets for them. There are a lot, and they even extend to undersea-style terrains. Though the geometry is very flexible and quite realistic, I found the textures to have too much of a ‘moire’ repeating pattern. Though that may not matter if all you want is a base on which to paint in Photoshop post-production.

Also worth a look is the older GeoForge for Poser or the Terraformers series for Poser.

Series 2: Old Wood. RDNA’s wide variety of trees designed for Poser renders, although I found the leaves on these to be unacceptably fuzzy. The render times were also through the roof… 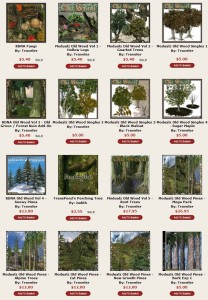 Series 3: RDNA Grasslands. A huge variety of grassland types, although be warned that these are mostly somewhat fuzzy 2D billboards (that oddly take a long time to render). Only some are 3D models like Lisa’s Botanicals…

Many of the natural packs shown at Content Paradise fail to convince — although you might want to look at dinosaur specialist Dinoraul with his prehistorical foliage pack ‘DR Plants 1’.

The DAZ Store also has a vast range (nearly 100) of the high-quality Lisa’s Botanicals series. These provide almost every garden flower you could want in beautiful 3D, plus exotics, a range of creepy dead woods for Halloween, and some fantasy plants such as a giant beanstalk. These are 3D models and will all work in DAZ and Poser.

Also worth a mention, in regard to the DAZ Store, are FirstBastion’s fine The Hidden Waterfalls and The Old Waterhole… 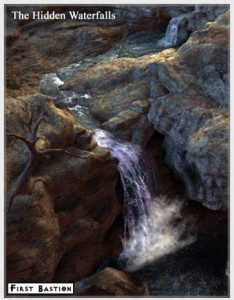 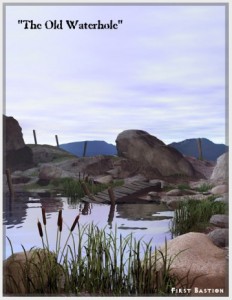 And Canyon for Poser on Renderosity…

There are also various older 2D cyclorama systems around, but these seem to be getting a bit long in the tooth these days. Few of their backgrounds can convince when a scene is rendered at 3600px with crisp models set in front of them. Although I guess you may find that you can retrofit them with crisp modern stock photography?

There is also Dimension Theory’s Ecomantics Efficient Ecosystems, available at the DAZ Store. The product page for this says “DAZ only”, but there are definitely Poser install files available since late 2011. Poser users should consult the Ecomantics forum. The system uses a mix of billboards, shallow 3D elements, and panoramas to speed up rendering dramatically. Personally I found it to be unacceptably fuzzy/muddy and could render nothing as crisp or vibrant as the preview images — although the render times for Efficient Ecosystems are certainly fast. Possibly the pack only really works well in DAZ? And that’s why DAZ doesn’t advertise the Poser version? My guess. 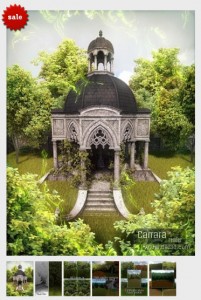 So I found that all the trees and tree and grass systems are rather disappointing, except for Lisa’s Botanicals. Lisa’s are the only natural packs I could really recommend spending good money on.

Incidentally, if you want to see beautiful 3D woodlands landscapes running at 60 frames per second in 1920px, try the free videogame The Hunter. And they look 10 times better than anything you could spend days rendering with the likes of the Runtime DNA natural packs. Possibly some screenshots from this could be made to fit the old Poser cycloramas?

One rather more expensive possibility, for Photoshop users not afraid of doing post-work, would be to look at expensive 2D clipart DVDs meant for architects and the like, such as Dosch Foreground Plants and Trees and the XFrog plants billboards series (although the latter are only at 800px).