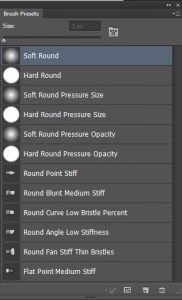 What are the alternatives and helpers, for managing your brushes? Here are all those I could find.

* The $19 Anastasiy’s MagicSquire 1.5 is billed as a “brush organising agent”. It’s rather expensive for what it is, which is a better ‘but not that much better’ replacement for the usual panels. Still… colour codes tabs, drag-and-drop sorting, better auto-generated brush-stoke previews and more are all improvements. If they’re worth $19 to you, then it’s the one. The great advantage it has over the Brusherator (below) is that it works in older versions of Photoshop… “CS3 CS4 CS5 CS6 and CC”.

* The $13 Brusherator 1.3 is for Photoshop CC and higher. Probably the most elegant of the lot, and you can configure it how you want it. But to use it you need to be running a newer version of Photoshop, and its management methods and menus are far from intuitive to learn. It’s also nearly impossible to set up on a second pen-monitor with a pen, and so it needs to be set up on your main monitor with mouse + keyboard.

* The $2 drbjr Custom Brush Manager. The panel uses Flash (and is thus an inherent security risk), but it does support Adobe Photoshop CS6 and early versions of CC on Windows. The panel UI is rather basic, but it is obviously has quite a few features and it only costs $2.

* The $10 Preset Viewer Argus is a general standalone Photoshop Preset Viewer. It renders out a big library of thumbnail previews from all of your Photoshop brushes and presets. No more squinting at tiny little “what is that?” icons, which may be useful for those who know what they’re looking for. It works with presets and brushes from all CS6 and CC versions, and has been updated to run on all versions of Windows.

* The freeware BrushView QuickLook PlugIn is another oldie, from circa 2009, and seemingly aimed at Photoshop Elements users. It… “allows you to see the contents of Photoshop brush files. Now you no longer need to load a brush file into Photoshop to see its contents. … supports three different version of Photoshop [Elements] brush files — versions 1, 2, and 6.”

* The freeware abrMate 1.1 was a “Brush Viewer, Organizer, Converter, and Exporter for Windows”. Nice, but it was last updated in 2011 and only supports brushes made in Photoshop CS5 or lower, so is not really that relevant now. Apparently it required Microsoft .Net Framework 4.0 to be installed.

That’s it. I’m guessing that possibly I could also do something with Adobe Bridge in finding brushes, but I never use that and don’t want to start.

Carrara 8 is DAZ Studio's official 'big sister' software.
Carrara loads all DAZ and Poser characters and scenes,
and supports LuxRender for top-quality realistic rendering.
« Oskarsson on sale
Ninja Sprite Male for $5 »
Welcome to the planet's only regular blog for the 3D software DAZ Studio and Poser! The design of this blog should adapt perfectly for reading on your iPad, Kindle Fire, digital tablet or smartphone. Enjoy!
Please become my patron on Patreon.