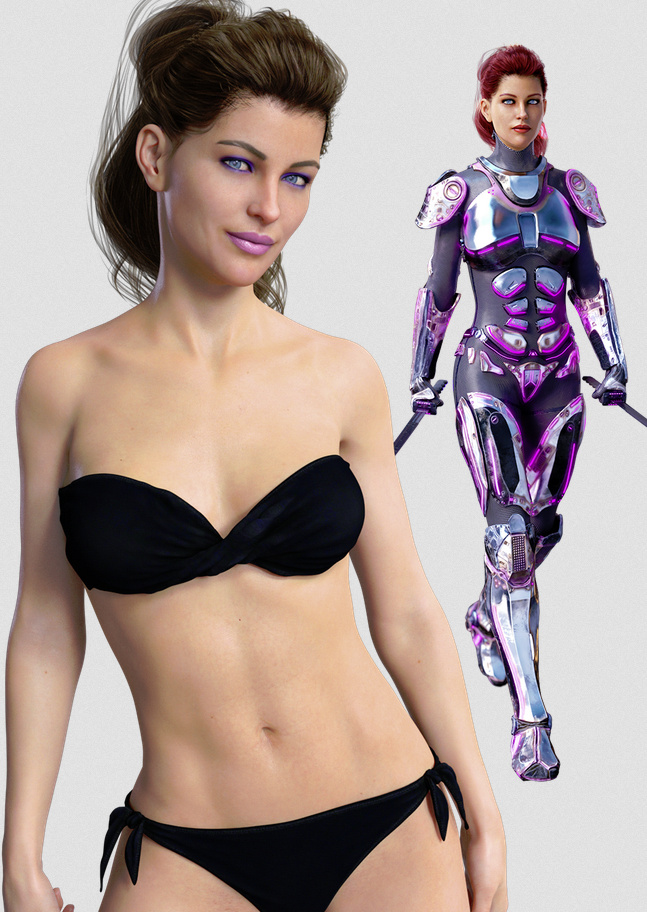 How to get V8? You first need “Genesis 8 Starter Essentials”, which is “included free with Daz Studio”. In 2015 the easiest way of installing V7 was to 1) get the very latest beta of DAZ Studio, then 2) find the relevant icons in the Content Library, then 3) click the ‘Download & Install’ button there. Looks like it’s the same process for the new V8, which…

After you have the free Genesis 8 up and running in DAZ Studio, you can then load up your newly-purchased Victoria 8 base figure. Here are the new store content pages for Victoria 8:

V8 has: slightly improved joint bending; the fingers and toes are more realistic; she has better shoe fitting and foot posing; and the skin shader has skin improvements (which are apparently being fully enabled for all Genesis characters via the next full version of DAZ Studio). There’s basic backwards compatibility for content, via a set of clones, which includes male -to- female clones. Nice to have, but it seems V8 may still need some workarounds to take older content. For instance, I see that someone has already felt the need to release a ‘V8 pose fix’ script for fixing old poses which don’t work properly on V8. I expect we’ll see more such ‘fix’ and ‘convert’ scripts for older Genesis content, in the coming weeks. Apparently there are also some types of older Genesis clothes which may break, specifically the sort that expect to ‘hook onto’ certain bones which are no longer present in the new V8. For instance, a bone has been removed from the foot, to enable better-looking bending of the foot when wearing high heels.

* There are sets of Victoria 8 Body Morphs and Head Morphs.

Apparently V8’s muscle groups automatically flex a little, according to the pose you apply to the body. Sounds good. Presumably the Body Morphs also work with this new default body behavior?

* There are Victoria 8 Expressions.

They look rather realistic, I must say, and are apparently “sculpted”. I haven’t had time to look into what that means, but they do look good. Apparently there are a whole lot of new bones in the V8 face, and I’m wondering if the V8 face also has the new feature where ‘muscle groups automatically flex a little’ according to the pose?

There’s also a Pro Bundle which is V8 plus a big starter range of dedicated poses and clothes.

The G8 Female Base is reported to transfer fine into Poser 11, using the existing and well-documented (if rather fiddly) workflow for importing G3 characters to Poser.

The new Victoria 8 is also being named in shorthand as “G8F/V8”. But that’s a bit of a handful on the keyboard, and so I’ll probably be typing either “G8F” or “V8” in future.

I expect we’ll also be getting a new Micheal 8 flagship male character soon. Back in 2015, Mike was set for a November release after the June release of Victoria.

The skipping of the Genesis generation numbers also suggests that the long-awaited ‘DAZ Studio 5’ may turn out to be named ‘DAZ Studio 8’, probably complete with a swishy new Moebius-strip ‘8’ logo. Just my guess.

« Released: ZBrush 4R8
Elephants Dream – the .blend production files »
Welcome to the planet's only regular blog for the 3D software DAZ Studio and Poser! The design of this blog should adapt perfectly for reading on your iPad, Kindle Fire, digital tablet or smartphone. Enjoy!
Please become my patron on Patreon.