An interesting demo of the forthcoming Eevee real-time viewport in Blender, albeit using a powerful $800 GeForce GTX 1080 Ti graphics card.﻿

Is it an iClone-killer? No, not yet. iClone runs on a lot less horsepower and it still has an easier user interface than Blender (even after the horrible/sluggish user interface introduced in iClone 6). On the other hand, Blender is free, and liable to optimise and speed up popular features reasonably rapidly.

“Blender 2.8 brings the minimum OpenGL version to 3.3, with even newer features for compatible hardware. The main use of this technology is Blender’s new real-time render engine: Eevee.”

However 2.8 is actually available to test now, as the 2.8 dev build of Blender, if you want to give it a try at your own risk. The mouse demo .blend file is here.

Apparently those with less-than-uber PCs might benefit from tweaking settings. Go to: the top menu | File | User Preferences | System -> openGL depth picking checked, and set this to use openGL Occlusion Queries.

I was able to get a real-time view with Emiliano Colantoni’s Wasp Bot demo, and a pleasingly large one. Though it took about 40 seconds for the lighting highlights to kick in on top of the partly lit model.

However the output render was not WYSIWYG (what you see is what you get). I had expected that an OpenGL render would get you a speedy render of the scene exactly as seen in real-time, just like iClone. But no.

2. OpenGL render from the same active viewport. About 40 seconds for 2000px. 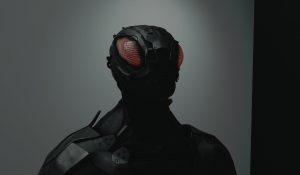 Ugh. Not the same. Nor did switching back to the default OpenGL settings help matters, or ticking various boxes in the OpenGL render dialogue. Oh well, maybe Eevee will become WYSIWYG by the time of the final Blender 2.8. But at present it seems to be just another nice-to-have big preview window, and not an actual real-time render production tool like iClone.

Carrara 8 is DAZ Studio's official 'big sister' software.
Carrara loads all DAZ and Poser characters and scenes,
and supports LuxRender for top-quality realistic rendering.
« A DAZ store sale appears to be underway?
Content Paradise – the makeover »
Welcome to the planet's only regular blog for the 3D software DAZ Studio and Poser! The design of this blog should adapt perfectly for reading on your iPad, Kindle Fire, digital tablet or smartphone. Enjoy!
Please become my patron on Patreon.