The popular free VLC media player is now at version 3.0. I found I was still at 2.2.x. It’s a very major update, and all the new features of 3.0 are listed here. Features I noted…

The only problem it has that, while VLC Media Player is excellent, one of its enduring mysteries is what happens when you drag-and-drop a 1, 2, 3, 4 etc list of files to a new playlist. The playlist order always gets garbled into 4, 1, 3, 2 etc. There’s still no way to re-order the list by File Name. Windows Media Player and other players never have any such problem. Even in version 3.0 of VLC there’s still no way to then re-order the list by File Name. You can re-sort the list every other way, but not by file-name order… 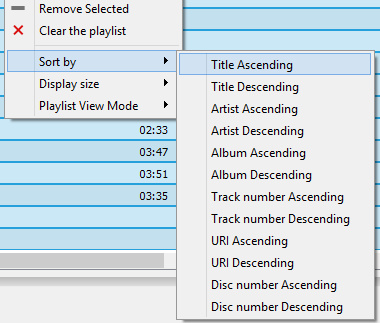 VLC claims to understand Windows’ own .WPL and .M3U, but in practice it doesn’t. Load a .M3U and it goes haywire in a never-ending loading loop. Load a .WPL and you only get the first track on the list. Load an .ASX in VLC and while the playlist is intact and in the correct order, you’ll see certain files in the album ‘greyed out’. Save that list as a VLC native .XSPF, load that it back into VLC and VLC one again goes haywire in a never-ending loading loop.

Carrara 8 is DAZ Studio's official 'big sister' software.
Carrara loads all DAZ and Poser characters and scenes,
and supports LuxRender for top-quality realistic rendering.
« Release: Google Earth Pro goes 64-bit
“Ve hav wayz of twiggling your prims…” »
Welcome to the planet's only regular blog for the 3D software DAZ Studio and Poser! The design of this blog should adapt perfectly for reading on your iPad, Kindle Fire, digital tablet or smartphone. Enjoy!
Please become my patron on Patreon.